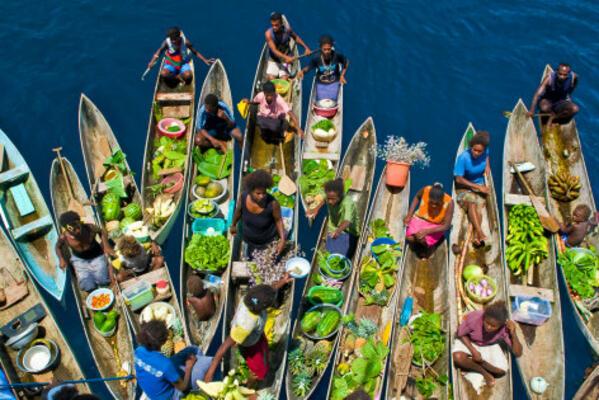 More than one million Australians went on a cruise in 2015, making Australia the highest proportion of cruisers per population in the world.

When the boat docks somewhere in the Pacific and Aussies disembark for a day on the beach, how much of their money ends up with that community?

A new report by the World Bank group's International Finance Corporation looked at how Papua New Guinea and the Solomon Islands benefited from cruise tourism on all levels, from big government departments down to handicraft sellers.

Taking PNG as an example, the study found the cruise industry contributed AUD$5.7 million with 54 percent down to cruise operator spending, 43 percent generated by passengers and three percent from cruise staff.

Carnival Australia executive chairman Ann Sherry told The Huffington Post Australia it was rewarding to see how industries grew around the cruise industry.

"We've been going to Eastern PNG now three years, and this year we will take 44,000 tourists into a region where before, there were only a few hundred," Sherry said.

"For the community, it focuses attention on the days the ships are in town because people from villages and communities will make sure they get to town with handicrafts to sell. That's a very significant opportunity where there was once no market for the materials they produce.

"We see a lot of small businesses popping up whether it's tour guides who know the history of the area, or food and drink sellers.

"Then there are more conventional changes to communities like building toilet blocks, sealed pathways and so forth."

As for the Australian market, Sherry said the interest for new destinations was insatiable and the Solomon Islands were an emerging hot destination.

"We've had such rapid growth, at 20 percent every year for the last decade and we're looking to continue that growth so we need new places to go, with different experiences," Sherry said.

"I think people want to broaden their cruising horizons to go to places that they perhaps hadn't thought of 10 years ago.”

"The Solomon Islands is one of those destinations where people can get a rich cultural experience but also a rich natural experience with amazing reefs, and unbelievably beautiful beaches.

"It also has a very strong Melanesian heritage."

An extended wharf was expected to be built in Honiara early next year to boost cruise numbers.