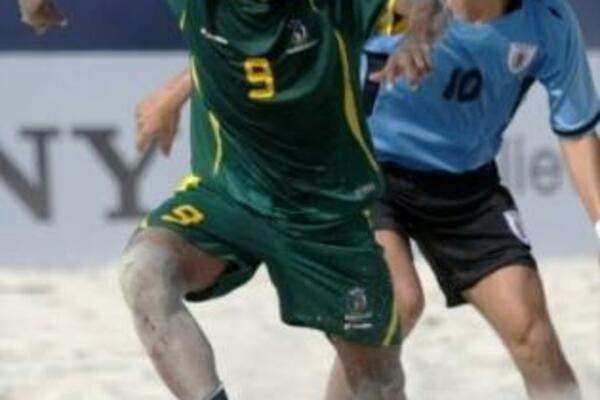 Solomon Islands have caused a massive upset in Dubai edging Uruguay 7-6 in what was an exhilarating start to their FIFA Beach Soccer World Cup Dubai 2009 campaign.

The Bilikiki boys stunned the Uruguayan side with three quick goals in the opening spell. Bilikiki's new wonder boy, Robert Laua showed amazing composure when he slotted in an early goal in what is his first ever Beach Soccer World Cup appearance. Goals from Gibson Hosea, Muri and Timothy Wale sent Solomon Islands 4-2 up at the first break.

The infallible Ricar gave Uruguay an early advantage, but The South Americans were incapable of nullifying Solomon Islands counter-attacking style, with Laua netting three goals, which completed his hat-trick, and a strike from Omokirio giving Solomon Islands a massive 7-2 lead before the end of the second period.

However, midway through the concluding period, Uruguay found their rhythm, and four goals within three minutes - Martin and Ricar both completed doubles, while Pampero and Fabian were also on target - made for a thrilling last few minutes. Las Charrúas threw everything forward in search of an equaliser, but the Bilikiki Boys ultimately escaped with the victory.

The teams will return to action today, when Uruguay will meet Portugal and Solomon Islands take on United Arab Emirates.