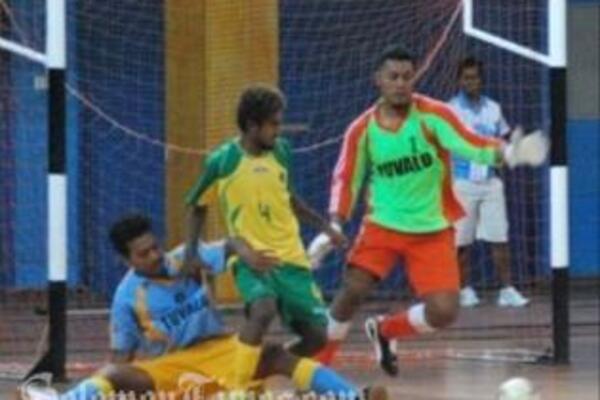 Kurukuru will now go on to meet Vanuatu in what is expected to be a thriller.
Source: Photo Supplied
Share
Thursday, 19 May 2011 08:50 AM

The Kurukuru have sent a warning to their semi-final rivals with a clinical dismantling of underdogs Tuvalu in the final match of Group B at the OFC Futsal Championship.

There was little riding on this game as the Solomons had already qualified for the next stage of the competition and Tuvalu had seen their hopes of doing likewise ended yesterday with an 11-1 loss to New Caledonia.

But the Kurukuru were still keen to give their fanatical fans another win as they had yet to make sure of top spot and the unfortunate Tuvalu defence bore the brunt of that desire.

As is often the case, inspirational captain Elliot Ragomo led the way but even he would not have expected to get on the score sheet seven times, a feat he managed thanks largely to a remarkable finish to the game.

Ragomo added five goals in the final four minutes to add to the two he scored earlier to complete a performance that underlined his reputation as the finest Futsal player in Oceania.

Although they failed to score, Tuvalu can take some heart from the fact that they restricted the Kurukuru to fewer goals than they put past them the last time the sides met - at the 2010 OFC Futsal Championship when the Solomons posted a 21-2 victory.