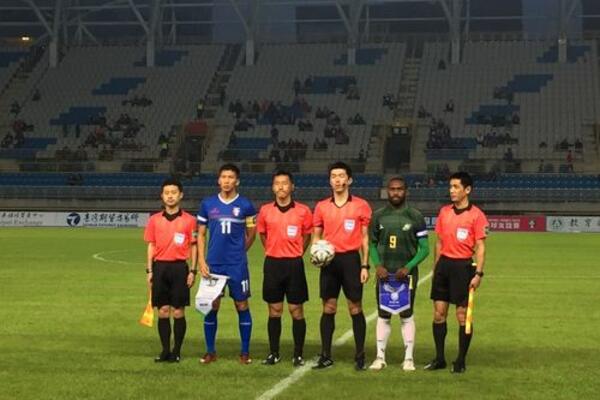 Captain Benjamin Totori scored the only goal of the game in the 41st minute through a penalty.
Source: Supplied
Share
Monday, 25 March 2019 09:12 AM

Taiwan's national football team lost to the visiting Solomon Islands 1-0 in an international friendly Sunday in the first match played by the two teams.

Taiwan is currently ranked 124 by FIFA, while Solomon Islands sit at 143.

Captain Benjamin Totori scored the only goal of the game in the 41st minute through a penalty.

Taiwan made several runs toward the Solomon Islands goal in the second half in search of an equalizer, but came up short.

Sunday's game at Taipei Stadium was also the first home game for Taiwan's new head coach Louis Lancaster, who took over the national team duties in February from Gary White.

After the game, Lancaster, who was an assistant when White was in charge of the national side, said he was proud of the team despite the loss because the game plan had been followed closely.

He called the team's performance "incredible," considering that the team consisted of players assembled from clubs around the globe, had only practiced together for 10 days.

Lancaster said he will continue to push the team to be more aggressive and ruthless, and felt it was only a matter of time before it becomes united as one in the months to come.

Toata hoped Taiwan's national team will visit the Solomon Islands in the near future and thanked Taiwan's government for helping his country build a new stadium.

He was referring to the signing of a memorandum of understanding by the two countries earlier this month under which Taiwan will offer "strategic loans," reported by media sources to be worth NT$900 million, to help the Pacific country build a national stadium for the 2023 Pacific Games.

Toata also said the team felt a boost of confidence from the presence and support of the Solomon Islands' ambassador to Taiwan and a group of about 60 Solomon Islands students in the country.

Offeri Sade, a student at Kaohsiung Medical University, told CNA before the game that they came from around the country to support the team in its first ever match in Taiwan, and said football is the No. 1 sport in Solomon Islands.