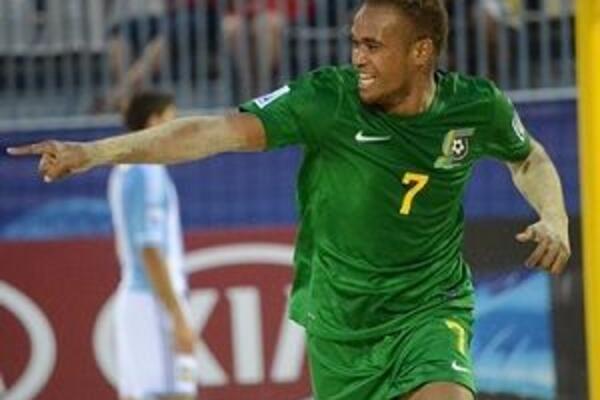 Robert Laua finished a skilful passing move which resulted in a stunning goal for the Bilikiki.
Source: boxscorenews.com
Share
Monday, 23 September 2013 11:44 AM

An incredible comeback from Argentina at the Beach Soccer World Cup in Tahiti has dampened Solomon Islands hopes as they finished 8-5 in a high-scoring affair which saw six goals produced in a five minute period at one stage.

CONMEBOL champions Argentina made a perfect start to the match with Jonathan Levi netting after just 48 seconds, with the side holding on to the lead for much of the first period.

That is until 17-year-old Anthony Talo, the youngest player at the tournament, equalised from close range with just nine seconds remaining after being perfectly set-up by his teammate.

Veteran James Naka came close to stealing the lead for his side shortly after the kick-off but for a miraculous goal-line clearance from Santiago Hilaire which assured the side’s went into the break locked at 1-1.

Naka was straight back at it following the restart, setting up Talo for his second and allowing the Oceania side to take the lead for the first time in the match. The youngster continues to carve a memorable path for himself as his goals today mark his second at a FIFA World Cup. He first scored as goalkeeper in the Solomon Islands victory over Guatemala at the FIFA Futsal World Cup in Thailand last year.

In a turning of the tides, Solomons soon grabbed their third as Robert Laua finished a stunning passing move which resulted in another goal for the Bilikiki. Incredibly, Joe Luwi then made it 4-1 two minutes later to give his side what seemed like an unattainable lead.

However Ezequiel Hilaire pulled a goal back almost immediately with a great shot off the post before brother Frederico Hilaire then made it 4-3 midway through the half.

Argentina seemed intent on pulling themselves back in line – and soon had their equaliser when Lucas Medero scored from the kick-off in the third period with one second gone on the stadium clock, before repeating the within seconds to give Argentina the lead for the second time in the match.

Ezequiel Hilaire made it 6-4 as Argentina started to dominate with some impressive sharp shooting and Medero soon had his third and fourth for the period.

Talo pulled one back for his hat-trick but it was too little too late for the Bilikiki as Argentina held them off to take the three points.

Bilikiki coach Gideon Omokirio was disappointed his side couldn't hold on to their lead but believes the tournament is not over yet.

"Our defeat to Argentina was just unlucky for us because we took the lead 4-1 into the second period before they bounced back to win the game," Omokirio says.

"We gave away the game because we lost concentration which gave them a space to capitalise on it."

While it has been a disappointing day for Solomon Islands they are now looking ahead to their must win match against El Salvador. They will be without Patrick Marie who, after picking up cautions against both Netherlands and Argentina, will miss the final group match.

"Our final game is a do-or-die match and we must give everything we have to qualify for the second stage," Omokirio says.