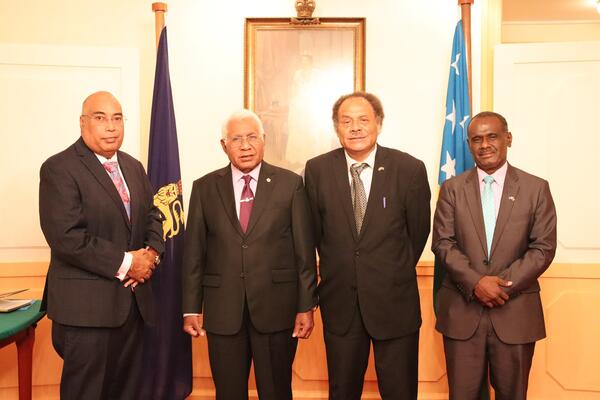 The ceremony now formalized Ambassador Fugui’s appointment to take up post in Beijing.

During the ceremony, Sir David charged Ambassador Fugui with a number of responsibilities including his first and foremost task to represent and promote the interests of the Government of Solomon Islands in the country he is accredited.

Sir David said the Government and people of Solomon Islands expect Ambassador Fugui to provide sound advice and deliberation on all matters during his tenure of office. These could be political, economic, social and cultural.

“At no time should personal interests and other forms of persuasions compromise these. Your full commitment is therefore expected. You are the link between the Solomon Islands Government and the Government of the country to which you are accredited. In true Solomon Islands tradition, your office and home will be the safe haven for Solomon Islanders in times of need,” Sir David said.

As Solomon Islands Chief Representative to the People’s Republic of China, Fugui’s allegiance is to the Government of the day and his instructions on all occasions during his mission will come from the Permanent Secretary of the Ministry of Foreign Affairs and External Trade to whom he is answerable.

Sir David added that the maintenance of permanent diplomatic missions overseas is a very costly exercise.

“The operating cost of these is substantial and considering the country’s weak financial situation, cost-saving measures that will not compromise the effective discharge of your duty should become the order of the day. Extravagance must be avoided at all costs,” Sir David said.

Meanwhile, Ambassador Fugui thanked the Solomon Island government, especially, the Cabinet for the endorsement of his Ambassadorial Candidacy and vowed to do his utmost best to serve the mission in Beijing.

Fugui said the nature of his diplomatic tasks is multi-varied which include providing advice and consultations on political, economic, socio-cultural, and during this Covid-period can be medical in nature.

The Office in Beijing will be the bridge between PRC and Solomon Islands. It will be the refuge for Solomon Island citizens in China, which Ambassador Fugui is committed to carry out with the greatest of care.

Ambassador Fugui will leave for Beijing as soon as convenient where he is expected to present his credentials to the President of the Republic of China.