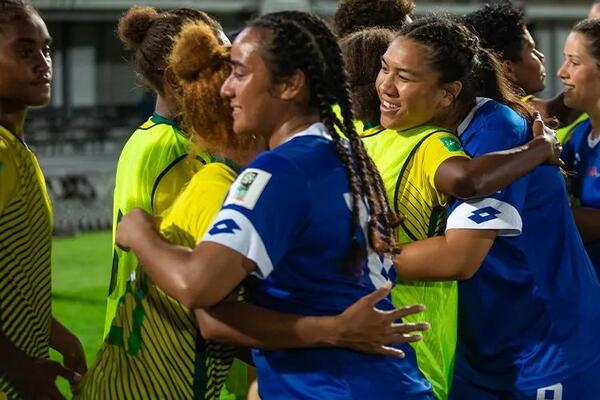 Following the third and fourth play-off at the OFC Women’s Nations Cup 2022, there’s plenty more to celebrate for the Solomon Islands and Samoa who were included in the biggest movements made in the latest FIFA/Coca-Cola Women’s World rankings.

The Solomon Islands leaped 15 spots to 105 ranking them sixth from ninth in the Oceania region, after finishing third at the Women’s Nations Cup in Fiji – the nation’s best ever finish in the competition’s history.

“To see us move three positions higher than where we were is a great achievement for us,” Bakalo said.

“Leading up to this tournament we focused on being a competitive team which was what pushed us to get this far.

“I’d like to the thank the Solrais Women’s Premier League plus the support from various business houses to sponsor the female clubs in our journey.”

It was a similar story for Samoa who made history for their country as they moved up 10 spots from 109 to 99 inside the world’s top 100 and the region’s top five. The milestone follows on from their top-four finish at the tournament in July.

“This is a culmination of the amount of work leading up to the tournament, the support from the Federation, the tournament itself and what the players and staff achieved in Fiji,” Ibrom said.

“We knew we had to be as competitive as possible knowing we hadn’t played an international match since 2019.

“We wanted to take the team as far as we could and it’s fair to say huge moments of history were made throughout the tournament which has laid the foundations for future national teams.”

Reigning champions Papua New Guinea maintained their ranking in the top 50 (49) and runners-up Fiji dropped down three spots from 69 to 72.