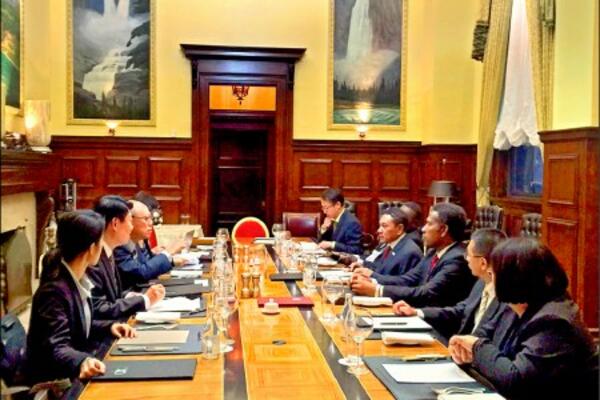 Taiwan’s bid for meaningful participation in the International Civil Aviation Organization was publicly backed by officials from the Solomon Islands during recent meetings with Ho Shu-ping, deputy director-general of the Civil Aeronautics Administration, in Montreal, Canada.

“ICAO must be fair to the aviation industry in Taiwan,” Solomon Islands Minister of Communication and Aviation Peter Shanel said. The country has made significant sectorwide contributions, especially in safety and security, and has always adhered to ICAO standards, he added.

Michael J. Halferty, Marshall Islands minister of transportation and communications, said his nation hopes to help Taiwan take part in ICAO’s 39th assembly. “In any way and any form we can, we will try to provide information to help Taiwan.”

Ho’s meeting with the officials representing the Republic of China (Taiwan) diplomatic allies took place on the sidelines of the 12-day assembly running until Oct. 7 in the Canadian city. She is leading a seven-member CAA delegation working to focus global attention on the unfairness of Taiwan’s exclusion from ICAO, drum up support for future involvement among likeminded countries and hold talks on issues such as anti-terrorism, aviation rights and flight safety with friendly nations.

Taiwan took part in the 38th assembly held in September 2013 as a special guest of then-ICAO Council President Roberto Kobeh Gonzalez. This was the first time in 42 years the nation had been invited to participate in an official meeting of the U.N. specialized agency responsible for setting international aviation standards and promoting air safety.

According to the Mainland Affairs Council, Taiwan wished to take part again in the triennial event this year, but was unable to do so due to political pressure from mainland China.