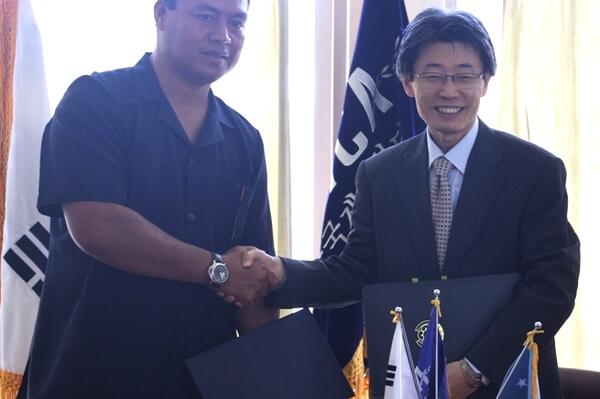 The milestone signing now opens the way for the reforestation project to begin with a Korean funding of SB$7.2 million to support the Government’s reforestation program.
Source: Photo supplied
Share
Wednesday, 26 June 2013 09:46 AM

The Governments of Solomon Islands and the Republic of Korea have signed a Framework Arrangement to formalize the start of a Reforestation Project in Solomon Islands.

The project has been developed to build the capacity of Solomon Islands officials in terms of forestry training and will be implemented by the Korea International Cooperation Agency (KOICA) throughout this year.

The arrangement is part of a follow-up to the framework agreement on grant aid between the Republic of Korea and the Solomon Islands Government signed way back in March 2012.

Following today’s signing forestry officials from Solomon Islands will undertake training in Korea while forestry experts from Korea will be dispatched to the country to assist in the implementation of the reforestation project.

Currently, KOICA is carrying out a project for the Solomon Islands Reforestation Master-plan to improve the living standard of Solomon Islanders by building capacity in forest resource management, sustainable environment and climate change response.

“The signing of the arrangement is a milestone by the two governments and must be recognized as it signifies the way forward for both countries in terms of Korea’s commitment to assist Solomon Islands forestry sector,” said Foreign Minister Clay Forau.

He added that Solomon Islands greatly appreciates and acknowledges the timely assistance from Korea that will hugely support reforestation throughout the country.

Ambassador Whie-jin said he was very pleased that the framework has been finalized at the end of his assignment and hopes that the project will improve the livelihood of the people of Solomon Islands.

He added that the signing of the arrangement will further consolidate his country’s bilateral relations with Solomon Islands which provide a framework agreement for other new areas to be explored and implemented in the social and economic cooperation between the two countries.

The framework will soon cover other areas including health and fisheries.

The signing ceremony was made in the presence of the Minister of Forestry and Research Hon. Dickson Mua and senior officials from the two governments.