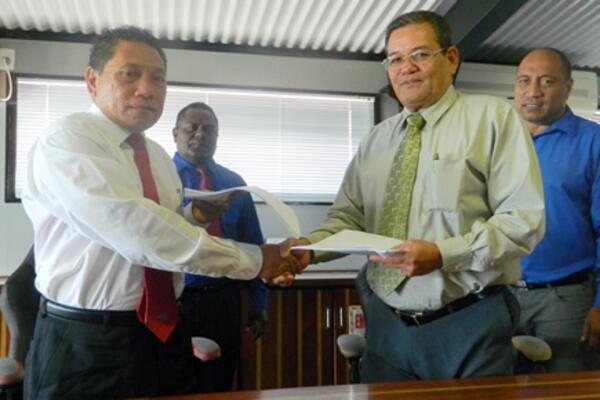 The Solomon Islands and Republic of Kiribati have reached agreement for a new Air Service Agreement (ASA) and Memorandum of Understanding (MOU) between the two countries.

Under the terms of the new ASA, Solomon Airlines and Air Kiribati and each countries’ Civil Aviation Authorities will cooperate to promote aviation as a sector.

The successful agreement follows a visit last week to the Solomon Islands by a senior Kiribati delegation led by Minister of Information, Communication, Transport and Tourism Development, the Hon. Willie Tokataake together with senior ministry officials, representatives of the Kiribati Civil Aviation Authority and Air Kiribati officials including Chairman Tabokai Kiritome and CEO Tarataake Teannaki.

While in Honiara, the Kiribati team met with their Solomon Islands’ counterparts, including Minister of Communication and Aviation, the Hon. Peter Shanel Agovaka and Permanent Secretary, Moses Virivolomo, together with Civil Aviation Authority of Solomon Islands (CAASI) Director, George Satu.

Under the terms of the new ASA, Solomon Airlines and Air Kiribati and each countries’ Civil Aviation Authorities will cooperate to promote aviation as one sector and in general, collaborate further on a raft of activities intended to contribute to both countries’ social and economic development.

Permanent Secretary Virivolomo said while the ASA was the culmination of several months of negotiation between both countries, steps were already in place to commence a new extended service by Solomon Airlines in association with Air Kiribati from Honiara to Tarawa.

“This new service will commence as soon as ‘visa-on-arrival’ procedures for Kiribati passport holders has been approved by the Solomon Islands Government,” Mr Virivolomo advised.

The Kiribati-Solomon Islands ASA marks the fourth such similar agreement Solomon Airlines has signed with aviation partners in the last 18 months.

This was followed in November 2015 with the signing of a further official ASA with the Republic of Vanuatu.

While in Honiara the Kiribati delegation also held meetings with the office of Solomon Islands Maritime and Shipping, the intention being to reach an agreement which will see Honiara become a pivotal and strategic partner to expand shipping to and from the Republic of Kiribati.