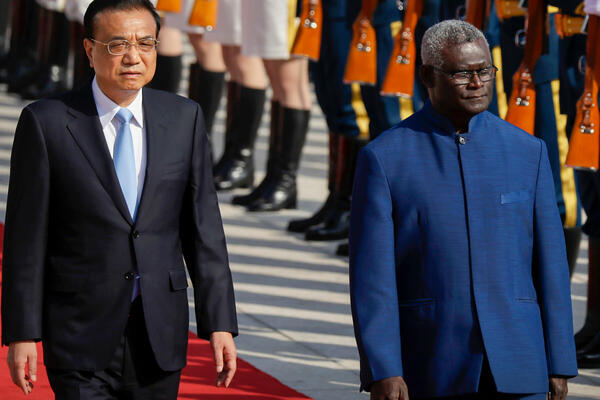 In 2019 Prime Minister Manasseh Sogavare held high-level talks in China during the first ever official visit to the country after his government decided to switch recognition to China.
Source: NYT
By Georgina Kekea
Share
Thursday, 21 April 2022 10:31 AM

China said it has signed the inter-governmental framework agreement on security cooperation this week with Solomon Islands.

He said the security cooperation aims at promoting social stability and long-term tranquillity in Solomon Islands, which conforms to the common interests of Solomon Islands and the Pacific region.

Wenbin said the China-Solomon Islands security cooperation follows the principle of equality and mutual benefit, and is based on respecting the will and actual need of Solomon Islands.

“The two sides will conduct cooperation in such areas as maintenance of social order, protection of the safety of people’s lives and property, humanitarian assistance and natural disaster response, in an effort to help Solomon Islands strengthen capacity building in safeguarding its own security”.

Webin also said that the China-Solomon Islands security cooperation is open, transparent and inclusive, and does not target any third party.

The Solomon Islands government has not made any official announcement yet of the signed agreement.

Australia’s Minister for International Development and the Pacific flew in to have an audience with the Solomon Islands Prime Minister despite Sogavare telling parliament that the security agreement does not include a military base.

On Monday the White House issued a statement that U.S government officials from the National Security Council, Department of State, Department of Defense and United States Agency for International Development will visit Solomon Islands, Fiji and Papua New Guinea to further deepen enduring ties with the region and to advance a free, open and resilient Indo-Pacific.

Solomon Islands is reiterating that the arrangements for the framework stems from the country’s National Development Strategy and there should not be any cause for worry.

“All our security arrangements with our partners stemmed from the Solomon Islands National Development Strategy. And that strategy has gone out nationwide. So we are basically starting to implement some of the strategies that we have already made”, PS Foreign Affairs, Collin Beck, recently told the Press.

In parliament on Tuesday, Chairman of the Public Accounts Committee, Douglas Ete made mention that an official group from China’s Ministry of Foreign Affairs will arrive in Honiara mid-May.

“I also understand that the PRC Foreign Affairs is arriving in Honiara in the middle of May to sign multilateral agreements and cooperation with the Solomon Islands government. That means we will be opening up cooperation in education, cooperation in fisheries and other socio-economic cooperation”, Ete said.