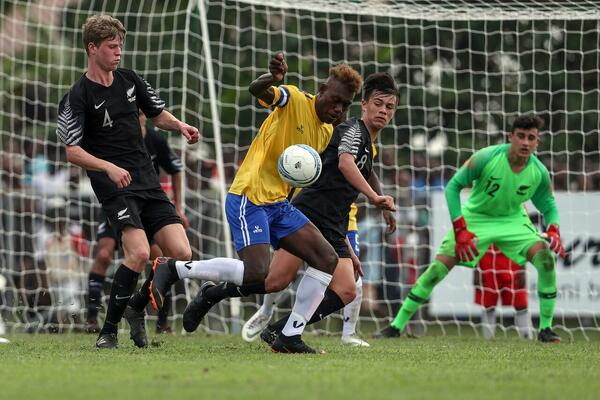 Both New Zealand and Solomon Islands have now advanced onto the Semi-Finals.
Share
Tuesday, 18 September 2018 06:48 AM

Hosts Solomon Islands advanced into the semi-finals as Group A winners after an impressive 5-0 win over Vanuatu in the day’s late encounter.

They will be joined by New Zealand who were pushed to the absolute limit by a talented and determined Papua New Guinea side who shocked many when they took a first half lead over the defending champions before going down 4-3.

New Zealand had enjoyed the majority of possession in the first half and had a slew of chances that they were unlucky not to see over the goal line and once again Papua New Guinea had goalkeeper Andrew Baniau to thank for a lot of that.

Although New Zealand were also their own worst enemy with a large majority of their shots going anywhere but on-target.

Papua New Guinea coach Anthony Pakakota made an early change to try Lee-Navu Faunt on for Joel Alex and it was a move that paid off almost immediately as a minute later his side took the lead.

Playing a lone striker role Siegfried Beschel put pressure on the goalkeeper Alex Paulsen after he received a pass back from the defender, whipping the ball off his foot, taking it around Paulsen and firing into the empty net.

New Zealand didn’t have anything left in the tank as they played out the remaining few minutes of the first half but were ready to bolt out of the blocks when the second half got underway.

Coach Jose Figueira made two half-time substitutions bringing in Henry Hamilton and Bradley Wilson in what proved an inspired decision by the gaffer.

Two minutes after the restart and Hamilton struck followed a minute later by Wilson to give New Zealand the lead for the first time in the encounter.

In the 55th minute Hamilton made it 3-1 when New Zealand turned over the ball deep in their own half before sending the striker through the backline to face down Baniau.

Papua New Guinea never once looked like giving up and as their opponents started to tire, the continued to take their chances when they came and soon Beschel was firing his second goal of the morning in.

New Zealand’s third sub Benjamin Old added a fourth for his side in the 83rd minute but PNG wasn’t done yet either with Beschel earning his hat-trick with a 90th minute header past Paulsen.

Figueira said his side started the match well but let themselves down as the match continued.

“I think we had four really good chances which we created building through the thirds and I think then suddenly, the boys might have thought it will come a bit easy, the goal will come,” he said.

“I made it clear at half-time that the teams here that we’re playing against don’t give up, you can’t take anything for granted.

“Then obviously we saw a great reaction in the second half but again, unfortunately, the mentality just slips, we get a bit lazy and complacent and the teams have got points to prove so again, happy to get the win and secure the semi.

“But big lessons for the boys in particular today.”

Following an impressive performance from his side Papua New Guinea coach Anthony Pakakota couldn’t help but be happy with his charges despite the loss.

“We’ve come prepared, we’ve done our homework on New Zealand and we gave them a challenge,” he said.

“We were determined for the win but unfortunately when you have kids like that they can lose concentration and I think we lost concentration in the second half and those three quick goals came from very clinical finishes.

“I think we worked on our zonal defending and holding off New Zealand’s 4-2-3-1 formation which builds up from the back.

“It’s a trap actually to get you to press them, then they’ll launch the ball from the back. But we held our positional defence well today and it paid off with the first goal.”

The match started with some scrappy play from both sides but it was the home team who settled down quickest.

Defender Javin Wae continued his scoring form in front of goal handing Solomon Islands an early lead with a header in the 4th minute.

Playing with eight of their reserves in the starting line-up, the hosts were vulnerable at times in their defending.

Vanuatu had some half chances mid-way through the first half up until debutant Hamilton Pao gave Solomon Islands a 2-0 lead at the break.

Solomon Islands brought Raphael Le’ai on for the second half and he immediately made it 3-0 as he rounded Vanuatu goal keeper Brendon Tankon to score his seventh goal of the tournament after just two minutes on the field.

Captain Charles Mani then added to the tally when he scored a brace in the 53th minute and 64th minute as Solomon Islands capped off another resounding win in the group stage.

Solomon Islands coach Stanley Waita was pleased with his second string side who put on a mature performance against their Melanesian counterparts.

“I think if you saw the first team line up, the first 11, I rested a few of my players and played a few of my bench players because I knew that we were going to win the game”, the former Solomon Islands international said.

“That’s why we field a couple of those players. I was impressed with my player, they went in and did exactly as I told them.”

Waita said the job is not done as the most important match for his team is the semi-final.

“Coming up is the very important game for me, this is what I wanted. I will do as much as I can to prepare for the semi-final, this is a big game for me and the game I really want”, he added.

Vanuatu exit the tournament without a win but coach Joel Rarua still took a moment to congratulate the Solomons before giving credit to his players for their overall effort against a strong Solomon Islands side.

“For us, we tried our best to score but unfortunately it wasn’t on our side,” he said.

“My boys are very young and we tried to compete in this division and it’s quite difficult against this Solomon team, but we respect them. The result is done, congratulations Solomon.”

For Vanuatu it’s back to the drawing board as they will go back home and work on their weaknesses.

“We need to go back and strengthen the youth leagues for the players to play a lot of games.

“We need to have the players play more games to have them prepared for the national team,” Rarua concluded.