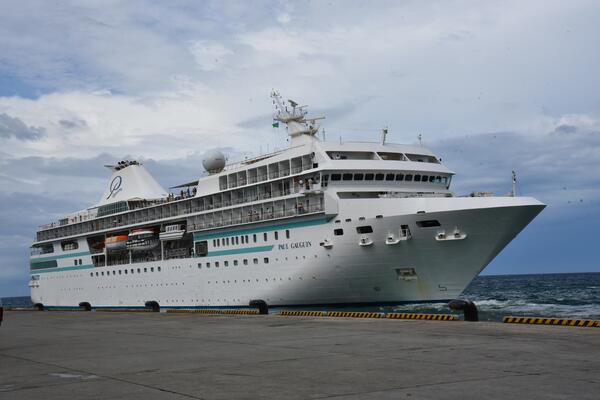 The visit by MS Paul Gauguin will be followed by Seabourn Cruise Line’s Seabourn Sojourn which arrives on 24 February at Tavanipupu Island Resort in Marau Sound before heading to Honiara.
Source: Supplied
Share
Thursday, 26 January 2023 08:56 AM

The Solomon Islands 2023 cruise season is off to a cracking start with seven ships already confirmed over the next four months.

First off the rank is the 165-cabin MS Paul Gauguin which will arrive in Solomon Islands waters on 25 January with a full complement of 330 passengers with local ports of call including the capital, Honiara

The visit by MS Paul Gauguin will be followed by Seabourn Cruise Line’s Seabourn Sojourn which arrives on 24 February at Tavanipupu Island Resort in Marau Sound before heading to Honiara.

The resort which made headlines several years ago when it hosted the then Duke and Duchess of Cambridge during their South Pacific tour.

These include Santa Ana, Tinakula, Nendo and Tulagi.

The destination, she said, is very well prepared for the international cruising market, boasting a multi-million dollar, state of the art cruise terminal in Honiara.

Local tourism authorities and international cruise companies have also identified several new ‘destinations within the destination’ which have the ability to manage visits by large cruise vessels including the key tourism corridor of Gizo in the Western Province, the deep-water harbour of Tulagi in Central Province, and Marau Sound in eastern Guadalcanal Province.

Ms Teama said the national tourist office has in the past held regular meetings with key cruise operators and cruise associations in Australia prior to the pandemic but all plans to further develop the sector were put on hold when the destination closed its borders for more than 800-days.

“But now we are fully re-open to international tourism, the time is right to rekindle the relationships we made with major cruise lines in the pre-COVID environment, and we are eager to get on with things” Ms Teama said.

“We know many of our neighbours benefit from international cruise traffic and the positive impact they have on the local economy, from hotels, transportation providers and food and beverage suppliers to local cultural groups and even the craftsmen making souvenirs,” she said.

“So the time is well overdue for the Solomon Islands to share in these benefits and to this end, Tourism Solomons, with Ministry of Culture & Tourism support and in conjunction with key local operators are already planning to re-establish our relationships with major cruise line representatives in short time.

“We know that there are more than 1 million Australians and New Zealanders enjoying cruises predominantly in South Pacific waters every year.

“If we were to attract just a small percentage of this key visitor arrival source, the benefits for our tourism industry would be exponential.”