Solomon Islands - So Much More 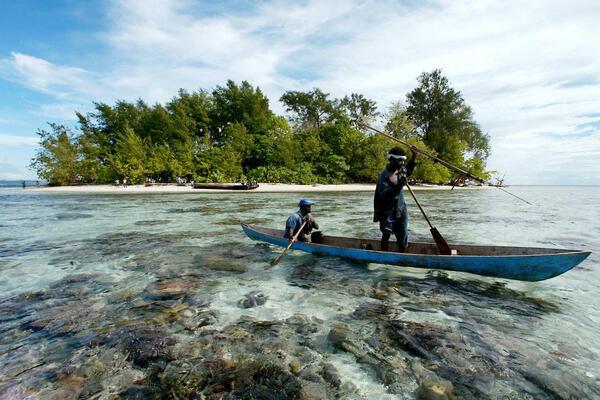 If it weren’t for the potholes slowing us down on the road to Honiara, on Guadalcanal in the Solomon Islands, I would have missed the sign that said Dolphin View Cottage, but our guide, Andrew, knew this road by heart.

Beyond the cottage, Guyas’ two teenagers lounged at a picnic table, playing with their pet cockatoo. Behind them the beach sloped down to Iron Bottom Sound, the World War II graveyard of 50-odd American and Japanese ships.

For a couple of minutes, the two men chatted, speaking Pijin, the lingua franca of the Solomons, so quietly I couldn’t make out the words. Then Guyas turned to me, switched to standard English, and we shook hands.

“You’re from America!” he said, lighting up. “Do you like it here? Have you been to Ghizo and seen the beautiful coral reefs? Yes, my grandfather was a coast watcher during World War II, a spy you’d say, reporting Japanese movements to the Americans. He watched the battle of Savo Island from right here.”

A name and a hearty handshake are de rigueur in the Solomon Islands, deep in the South Pacific, 2,040 miles northeast of Australia. Being American counts too, especially on Guadalcanal, where 5,800 Americans were killed or injured battling the Japanese 75 years ago.

“Today we’re known for two things,” said Ellison Kyere of the tourism bureau, when my partner, Steve, and I met him at the Lime Lounge café in Honiara, capital of the Solomon Islands. “For battle sites and wreck dives. For what’s under the water. It’s time to tell the story of island life on land, stories about people and traditions.”

A tall order, indeed. The islanders, mostly Melanesians, live in villages — rural family groups — on 347 of the country’s 922 islands. They speak about 75 languages and observe local customs. Some wear grass skirts and use shell money for barter; others are proud to count headhunters among their ancestors.

A few own speed boats; most paddle between islands in a mola, a handmade dugout canoe. Most fish and raise vegetables; a few work in tourism, in schools or in the government. Most people speak English, a bonus for visitors from America.

We took an overnight flight from Los Angeles to Fiji’s Nadi airport, then, after a four-hour wait, boarded another plane for the three-hour flight to Honiara’s Henderson International Airport.

I had my phone so I took advantage of the “tourist special” offered at the airport: a SIM card for $1.30, good for 75 minutes. And we booked a guide, Andrew, for the next day.

We were still yawning when he pulled up in a shiny black SUV. “All our cars are Japanese, and they’re all secondhand,” he said by way of apology.

“The Japanese are building a bridge here and paving the street and it’s taking forever,” he said as we inched along in heavy traffic, past grimy storefronts and vegetable stands overflowing with greens, tomatoes and squash.

I looked in vain for something worth bragging about — a hospital or an art school — but Andrew had already turned, heading to the Memorial Garden, the Guadalcanal American Memorial and Bonegi Beach, now famous for wreck dives.

“And here’s Bloody Ridge,” he said, parking the car on a grassy hump of land.

It was quiet as we gazed over green and yellow fields and the ocean beyond. And it was ghostly, standing over a dozen overgrown foxholes where 40 Marines died on a single night in 1942.

Our trip — now nicknamed “Solomons 101” — began in earnest when we flew north on a 40-seater to airfields at Gizo, on Ghizo Island, and Munda, on New Georgia, in the Western Province.

The Western Province is a maze of islands, a reminder that the country is the South Pacific’s second largest, with more land than French Polynesia (Tahiti and neighbors), Fiji, the Cooks, Samoa, Tonga, Vanuatu, Tuvalu and the Line Islands combined.

A speedboat took us to Fatboys Resort, a rustic all-inclusive lodge built on stilts over deep water to avoid damaging the shallow-water coral. A 325-foot-long pier linked the lodge to the bungalows onshore.

This was our base camp for the next two days and several outings: to Kennedy Island where Lt. John F. Kennedy and his PT-109 crew swam ashore after a Japanese ship sank their boat, and a high-speed inter-island ride to a sandy islet for snorkeling and a grilled lobster picnic.

“The rising ocean is washing the island away,” said Sam, the boat driver, pointing at a dying tree, its roots submerged in salt water. “Global warming,” he added.

It was party time the next morning at Gizo’s Friday market. Families arrived in dugouts and docked at the waterfront, buyers crowded the aisles, coins were exchanged, stall owners hailed their friends and women filled their shopping bags. Everyone wanted to talk, asking where we were from and posing for photos.

Ngali nuts — smooth and mild like macadamia nuts — were in season, so I stocked up on a couple of bags.Fresh betel nuts were there too, heaped beside taro leaves, spinach and two kinds of purple bananas.

Later, I stopped at a snack shack where I met a man sitting in the shade, chewing a betel nut. (Red-rimmed eyes are a dead giveaway.) “Do they make you feel relaxed?” I asked.

“Oh, no, they give you energy,” he said, smiling. He added a pinch of slaked lime (ash from burned clam shells) and showed me how to fold the nut and betel leaf together.

“One or two of these and I’ll want to get up and get out and work all day,” he said.

From Ghizo Island, we took a 15-minute flight to Munda, the Solomons’ dive capital, where we stayed at the Agnes Gateway Hotel, a spartan waterfront compound popular with divers and backpackers.

We signed up for a tour with boat pilot Billy Kere — a “descendant of the Roviana headhunters” he told us — speeding over the swells for 40 jolting minutes to shadowy Skull Island, where rows of dried skulls stared at us from crudely piled stone altars.

“Don’t worry, the headhunters are gone,” Kere said. “It’s all about love nowadays. But not then. Sin, and your head comes off,” he said, gleefully slashing his hand across his neck.

Fifteen more minutes took us to Lubaria Island, the PT boat base where Kennedy and his crew were stationed. Ata, the ancient keeper, dug into a sack, retrieved a carved wood bust of Kennedy and set it on its proper place on a small monument. He hides the bust at night, he said: “It’s been stolen and recovered twice.”

Nearby bushes have hidden the rusting gun emplacements; the modern bathroom was a welcome surprise.

Our last stop was Tavanipupu, an isolated islet resort southeast of Guadalcanal, where Prince William and Catherine, Duchess of Cambridge, stayed in 2012 during a tour of England’s former colonies.

Although family-run resorts are common in the Solomons, Tavanipupu defines Pacific luxury.

The staff leads guided fishing and sightseeing trips, and a daily stroll on the circle-island trail is just long enough. The water is as clear as glass. And it was affordable in low season, December through July.

As our trip wound down and the 16-seat Twin Otter lifted off the grass for the return to Honiara, I realized how much we had missed, from volcanoes to rushing rivers and rain forests to beaches. The Solomons are an adventurer’s playground, a challenge, and yet, an echo of another century.

Never mind the potholes. I’ll be back.