Solomon Islanders in US Hope to be Repatriated Soon 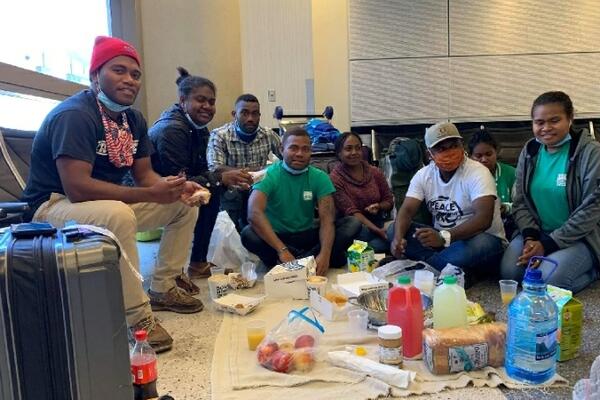 The youths are in the States on a program with International Leadership Training Program (ILTP).
Source: Supplied
By Georgina Kekea
Share
Thursday, 28 May 2020 08:38 AM

12 Solomon Islanders currently in the United States on a Youth leadership program are hoping to be repatriated back to the country soon.

Recently it was reported that eight of the 12 islanders were left stranded at the Los Angeles airport.

But Solomon Islands Deputy Permanent Representative to the United Nations based in New York, Janice Mose Kemakeza says the Solomon Islanders were not able to board the flight in LA.

"They are understandably disappointed that the airline refused to airlift them but they have not been left stranded by their training organizers at ILTP as alluded to earlier", Mrs. Kemakeza said.

Information reaching the Ministry of Foreign Affairs and External Trade (MFAET) in Honiara said the eight youths in the US were denied boarding in LA, by Air New Zealand.

“The youths flew back to Georgia and are now in their training camp. They are looked after by a faith based institution which also has an office in Honiara. Our Mission is in touch with organizers who confirmed they are well”, Permanent Secretary in MFAET, Collin Beck said.

The youths are in the States on a program with International Leadership Training Program (ILTP).

ILTP is a non-profit organization based in the United States.

Its mission is to raise young conscientious leaders who can contribute to peace-building efforts around the world.

The program is open to motivated young adults in the US and abroad and said to provide participants with short-term comprehensive leadership training through volunteer service and educational seminars.

The 12 Solomon Islanders were enrolled in this program.

"The organizers can only afford to send eight of them home. It is quite expensive", Mrs. Kemakeza from the Solomon Islands New York Office said.

At the same time a fundraiser was launched via GoFundMe to support repatriation of the Solomon Islanders.

A Mr. Johnny Tapu has initiated this cause. He said they are raising money to help the 12 stranded friends (wantoks) in the USA.

"Please donate and help them. Every single cent donated will go toward their meals and other important things", he said. The target goal is $10,000.00 presumably in USD.

Meanwhile Mrs. Kemakeza said so far the 12 Solomon Islanders are the only ones in the US who have reached out to the mission seeking clarification on repatriation schedules for Solomon Islands.

It is not yet known when the Solomon Islanders will be repatriated back to the country.

Updated at 2:10pm to include comments from Permanent Secretary (MFAET) Collin Beck.