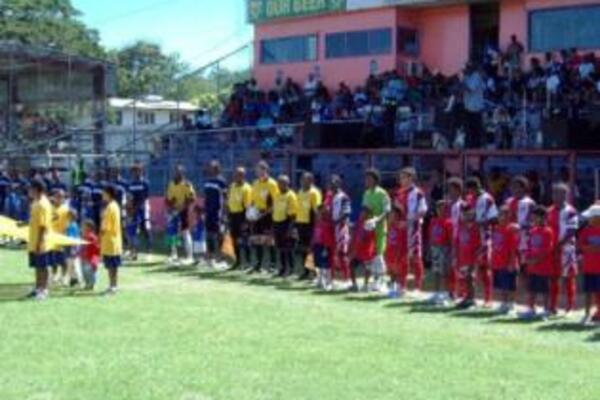 Their defeat of Tafea was comprehensive and Solomon Islands players were instrumental in their victory including the scoring of 3 of the goals in the 4 - 0 trouncing of the Vanuatu champions.

Hekari United's lineup for Round 4 of the O-League was revamped earlier this month with the addition of Solomon Islanders Gideon Omokirio, Stanley Waita, Henry Fa'arodo, Eddie Ngaitini and Alick Maemae. The recruitment frenzy was an apparent attempt to gain ground against Tafea and Lautoka who are top contenders in Pool B. The five (5) players joined fellow countrymen Benjamin Mela and Joachim Waroi who have been playing for the PNG side for a number of years already.

Hekari had previously invested in Solomon Islands players but the results this time around were immediate as well as spectacular.

Prolific midfielder Alick Maemae rewarded Hekari's investment in him by scoring 2 goals to shake the Tafea side up. Joachim Waroi also got one in what was a great game for Hekari United. Tuimasi Manuca completed Hekari United's brilliant victory with his goal.

The 4 - 0 win moved Hekari United to the top of the Pool B ladder but their lead was short lived. Lautoka now claim pole position after defeating Solomon Islands champions Marist by 3 - 0 at home in Fiji.

Tafea suffered a similar defeat against fellow Vanuatu club, Amicale, last weekend in their local league. Amicale also turned to Solomon Islands for talent in their bid for glory in the 2010 season. Batram Suri, Kidstone Billy and Richard Anisua are among the 5 players recruited by Amicale in January.

In the Pool A match that was played on Saturday Auckland City beat AS Manu Ura by 2 goals to nil. Both City's goals were scored in the second half. Ian Hogg scored in the 69th minute and Daniel Koprivic sealed the victory in the 89th minute following good exchange play between him and Jason Hayne.