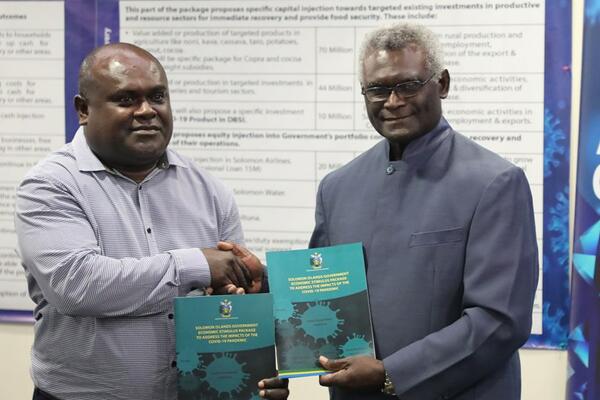 Prime Minister Manasseh Sogavare launched the Solomon Islands Economic Stimulus Package in early May 2020. Over $US39 million was committed by government.
Source: File
By Jimmy Nolan
Share
Wednesday, 25 August 2021 09:50 AM

The survey found that the majority of those interviewed felt that there is a lack of transparency and accountability around the COVID-19 ESP payout. The is in stark contrast to the strong approval of the government’s anti-COVID-19 health measures.

The survey found that a widespread lack of awareness about the ESP has led to unrealistic expectations across provinces which, unmet, channel people’s frustration toward the government and those groups or individuals suspected of benefiting unfairly from the program.

The survey also found that a key source of confusion is related to who qualifies to apply for funding and under what conditions. In the absence of clear qualification criteria and verification mechanisms, research participants were concerned that the ESP has opened opportunities for preferential allocation and misuse of money.

The survey findings suggests that such complaint fits into broader criticism about the opaque manner in which major public policy decisions are made, including on foreign relations, constituency development funds, and local development.

Prime Minister Manasseh Sogavare launched the Solomon Islands Economic Stimulus Package in early May 2020. Over $US39 million was committed by government to help Solomon Islanders struggling with the economic impacts of the pandemic.

Transparency Solomon Islands chief executive Ruth Liloqula had been critical of the ESP, stating that a leaked list of recipients shows many public servants and people without legitimate businesses or projects among the beneficiaries.

Ms Liloqula has been calling for the funds to be audited.

"Some of the reports that we get, some people who do not grow cocoa at all or farm pigs at all they are receiving the money and they are just drinking it away," Ruth Liloqula said in an earlier interview with the media.

"There are also some whose names have appeared in the list but actually they are not the ones that applied," she said.

With extracts from DevPolicy