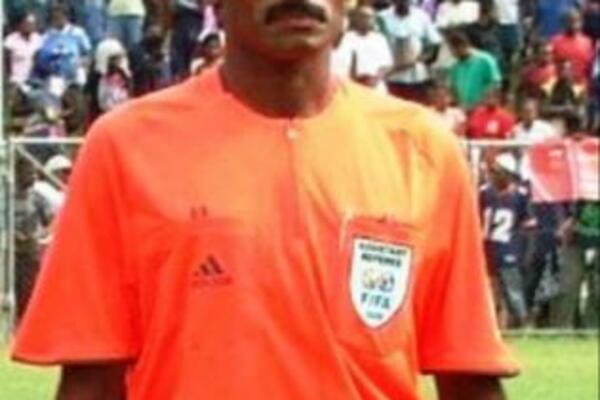 Matthew Taro says that he had set himself the goal of officiating in the FIFA World Cup finals back in 2001 so the appointment is the result of years of hard work.
Source: Photo Supplied
Share
Monday, 08 February 2010 09:17 AM

Matthew Taro has made history by becoming the first Solomon Islander to be appointed to officiate in the FIFA World Cup finals.

Two teams from the Oceania region were appointed for the FIFA 2010 World Cup in South Africa and Taro was in one of the teams. The appointments were confirmed by the FIFA Referee Committee meeting held in Zurich on Friday 5th of February, 2010.

A total of 6 referees from Oceania are being called for duty at the biggest football tournament in the world. Four (4) of the six (6) are from New Zealand: Mike Hester (Referee), Peter O'Leary (Referee), Jan Hintz (Assitant Referee) and Brent Best (Assistant Referee). Matthew Taro and Tevita Makasini (Assistant Referee, Tonga) are the 2 islanders in team.

A statement from the Oceania Football Confederation (OFC) Media Office said that the OFC President, Reynald Temarii, congratulated the appointees saying that they have worked hard and deserved their appointments. Temarii also thanked Massimo Raveino, Neil Poloso and Kader Touati, members of the FIFA Referee Assistant Program team in Oceania, for their hard work in supporting the OFC elite referees and for lifting the standard of refereeing in Oceania.

Matthew Taro himself was reserved when he received the news acknowledging the amount of responsibility in officiating at a FIFA World Cup final. "I am happy and I thank God for this appointment," Taro said. "This is an important breakthrough for Solomon Islands." Taro also said that he had set himself the goal of officiating in the FIFA World Cup finals back in 2001 so the appointment is the result of years of hard work.

It was indeed a long and hard climb for Matthew Taro who is outstanding in his attention to his training. Locally, he is considered to be one of the best referees. He is also generous with his time often volunteering to assist other local referees with their fitness.

The Solomon Islands Football Federation (SIFF) Referee Development Officer, Justin Mutukera, said that this is a breakthrough and shows that the quality of refereeing in the Solomon Islands is going up. "I congratulate Taro for the appointment because he has worked hard throughout the years and totally deserves this, this is truly a proud moment for us referees in Solomon Islands," Mutukera said.

Mutukera also thanked the FIFA Referees Committee for the appointments which he said make Oceania a proud confederation on level par with other member confederations of FIFA. Mutukera also acknowledged the support given by Taro's family and his employer.

The first FIFA badge holder in Solomon Islands, David Sau, congratulated Taro saying that this is a momentous occasion and something for the whole country to celebrate. "I am proud and the whole country should be proud, this is the ultimate appointment for a football referee and I offer my sincere congratulations to Taro," Sau said.

A strict diet and fitness regime has been issued to the appointees to follow as they prepare for the tournament.