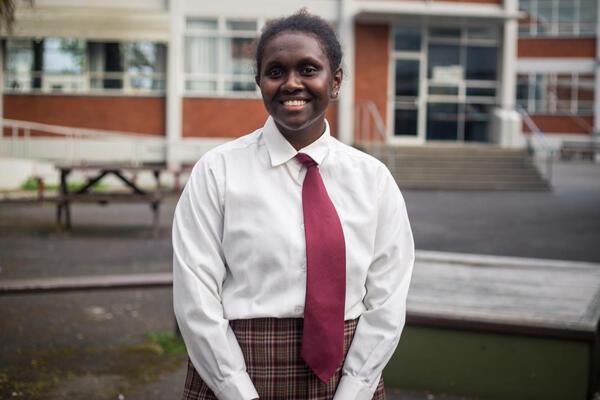 The emerging star is currently an actress for Massive Theatre Company based in Aucklanda and a student at Otago University studying a Bachelors of Science, majoring in Chemistry.
Source: coconet.tv
Share
Thursday, 27 May 2021 10:43 AM

Elsie Polosovai is an on the rise actress that starred in episode 4 of the 5 part series "Teine Sa."

The episode titled Hiama follows a young Solomon Islands teenager encountering bullying and micro-aggressions at school, and takes fate into her own hands when she is visited by a guardian spirit of her family. Elsie plays the protagonist teenager Vani at the center of this story.

This emerging star is a 19 year old student from Pararui in the Choiseul Province and Kwaio in the Malaita Province in the Solomon Islands. She is currently an actress for Massive Theatre Company based in Aucklanda and a student at Otago University studying a Bachelors of Science, majoring in Chemistry.

To create a believable character Elsie believes in extensentive research in the world of the character and connecting to all the different elements that influence them. This way she says she can inhibit the character physically and more importantly mentally which she believes is the core of creating a rounded character.

It wasnt too hard for her connecting with her character in Hiama as they both shared similarities in being a minority within a minority and reckoning with the journey of self-acceptance. "It took me awhile to be completely comfortable beinf myself. I learned overtime that what makes me different gives me power. Thats the advice I would give to other melanesian girls on a jouney of self-acceptance. I'd say see and feel the power you have in being different," Elsie expressed as she talked about relating to her characters journey.

Elsie was born in the Western Province of the Solomon Islands and grew up there until her family moved to New Zealand in 2014. The young actress says that the positive response she has recieved from both her community in New Zealand and in her homelands makes her extremely proud. "All the positive comments about it (Hiama) is uplifting and encoraging," Elsie shared.

Elsie's preformance in Hiama is described as monumental for the rising star actress who hopes to futher explore this genre in her career.

"Hiama is an opportunity for us to share our stories so people can understand us as a minority," Elsie Polosovai shares on why she hopes people take time to watch her episode Hiama of the Teine Sa series.