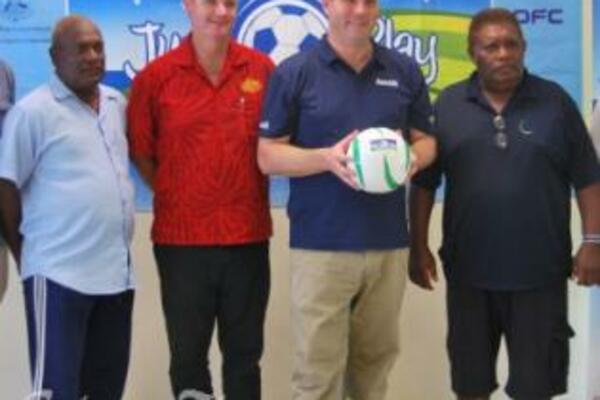 The OFC Just Play programme has reached a significant milestone with the announcement that 100,000 children from across the Pacific have now taken part in the highly-successful initiative.

The 100,000th participant is Esther Naihoro, a nine-year-old girl from Pipisu Primary School in the South Malaita region of Solomon Islands, and her unwitting entry into the record books was revealed by Australia's Parliamentary Secretary for Pacific Island Affairs Hon Richard Marles during a visit to the Solomon Islands Football Federation (SIFF) in Honiara this week.

"Just Play has provided thousands of children with the opportunity to build critical life skills through sport. This is creating social change in communities across the Pacific," Hon Marles said.

"Just Play is ensuring a lasting impact by building the capacity of teachers and community members to independently deliver quality sporting activities for children."

OFC General Secretary Tai Nicholas is pleased with the progress of Just Play and believes its aims are being met.

"Just Play has proven to be a massive success and is making a positive difference to the lives of children from all parts of Oceania," he says. "Just Play uses football as a tool for social development and epitomises how the power of sport can be utilised to raise awareness about social issues and build better communities."

Developed by the OFC social responsibility and technical departments, Just Play is a social development programme funded by UEFA and the Australian Government through its agencies the Australian Agency for International Development (AusAID) and the Australian Sports Commission (ASC). It is being rolled out by OFC in partnership with Football Federation Australia (FFA) across the Pacific over a three-year period between 2009 and 2012.

The FIFA-approved programme is designed for children aged six to 12 and promotes physical activity while encouraging community involvement, healthy living and gender equality. It is based around structured activity programmes as well as the distribution of equipment packs containing balls, cones, bibs, activity manuals and other resources that enable children to play football.

The confederation has also been working in New Zealand with Special Olympics on a Just Play programme for people with mental disabilities and has launched the new initiative in Samoa and Fiji.

As well as reaching 100,000 children, Just Play has trained over 2,000 teachers and recent review findings have shown that students who participate in Just Play are more motivated to go to school, develop positive citizenship skills and demonstrate strong leadership within their communities.