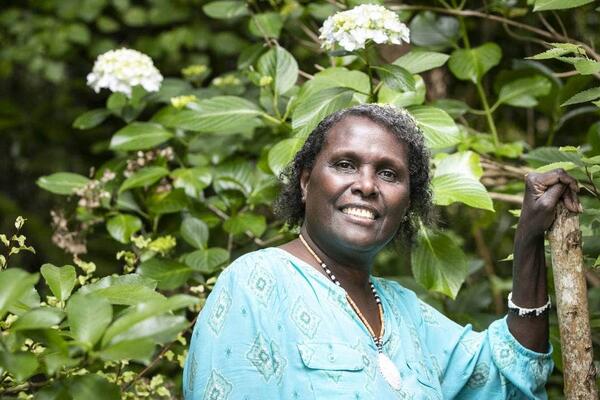 Known as Glo, she has been promoting Solomon Islands and Melanesian culture, language and values in New Zealand for more than 25 years.
Source: ROSS GIBLIN/STUFF
By Nicholas Boyack (stuff.co.nz)
Share
Friday, 31 December 2021 10:32 AM

Solomon Islander Glorious Oxenham has been awarded a QSM, in New Zealand’s New Year Honours, for services to Melanesian culture.

Known as Glo, she has been promoting Solomon Islands and Melanesian culture, language and values for more than 25 years.

Glo hopes recent publicity on the ongoing civil unrest in the Solomon Islands does not give New Zealanders a false impression of her homeland.

The Lower Hutt resident received a Queen’s Service Medal in the New Year Honours for services to the Melanesian community in New Zealand.

Kiwis, she said, did not know much about the Solomons, and the recent unrest, which resulted in New Zealand sending peacekeepers, gave a false impression.

The unrest was mostly in the capital, Honiara, and did not reflect what was happening in the rest of the country, which was made up of numerous islands.

“Young people get carried away and cause all these incidents but the Solomons are called the Happy Isles and it is a very friendly and beautiful country.”

Oxenham has been in New Zealand for 41 years after marrying a Kiwi who was with Volunteer Service Aboard.

As President of the Lower North Island Wantok Association, she has helped organise numerous activities, fundraising events and community celebrations.

Fluent in Pidgin English, she provides advice to police, defence and diplomatic personnel before they are deployed to the Solomons.

One project she is particularly proud of is the Wellington Melanesia Women and Friends Group.

“A lot of the women tend to be shy and not put themselves forward and we encourage them to speak up,” she said.

An unusual project she was involved with was using New Zealand flax for an exhibition at Pataka Art Museum, Woven Bags of Melanesia.

Oxenham works as a pre-school teacher in Taita and is a mother of two.