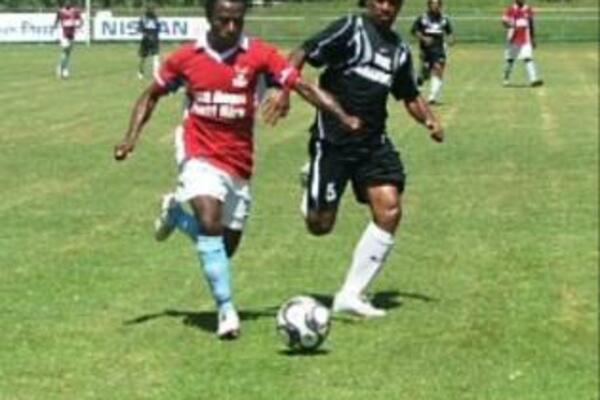 One could be forgiven for thinking that Honiara would have an easy game against Isabel but the 0 - 0 score line at the end of the match showed just how far provincial teams have developed in the recent past.

Isabel lost to Rennell Bellona 3-1 in their opening match and could not afford another loss. Honiara was much more superior and their array of DJ League players was going to be their major advantage. Isabel had only their determination and their faith to back them up.

The match opened to a disappointing start for Honiara who failed to register any convincing attacks on the Isabellians. They had more possession but their attempts at front failed to draw the best from the Isabel goalkeeper.

Isabel, on the other hand, were making good use of the little possession they had. Using Jenan Kapu in the sidelines they pushed against the Honiara and created some scoring opportunities which, unfortunately for themselves, they failed to turn into goals.

Ezra Sale played well for Honiara in attack but like their opponents they failed to translate their attempts into goals.

The half-time score was 0 - 0 and Isabel walked out looking the more satisfied.

The second half was another chapter of wasted opportunities from both sides and the spectators were left unimpressed with the performance of Honiara.

The 0 - 0 score line remained until the end of the game and the Isabel side celebrated a well deserved draw while Honiara will have to revisit the drawing board if they want to convince their fans.

In other matches Malaita fielded a full strength team to face Makira Ulawa who has a reputation as one of the toughest teams in recent Solomon Cup tournaments. Malaita had Batram Suri, Kidstone Billy and Alick Maemae up front and they kept the pressure high on the Makira/Ulawa defence.

4 - 1 was the final score in a healthy win for Malaita and their performance on the day was top notch. Makira Ulawa on the other hand played well and could have won the match against another team.

The Temotuans proved that they were still contenders with an early goal from Commins Menapi who had to make amends to his fans after a below average performance in their opening match.

The pace of Joses Nawo was too much for Central and they should have scored more goals in the first half save for some do or die blocks from their opponent's keeper.

Temotu continued their dominance of the game in the second half and they extended their lead through Bentley Nalangu making it 3 - 0 in their favour. Central had could do little to reply and their attempts were quickly closed down by the Arrows defenders.

Joses Nawo continued with the pressure for more goals and 2 minutes from regulation time Franklyn Tuputa found the back of the net after a scramble in the Central Province 18 yard box.

It was 4 - 0 in favour of Temotu when full time was called and the Temotu fans are now reassured of their hopes for their team to go through to the second round.