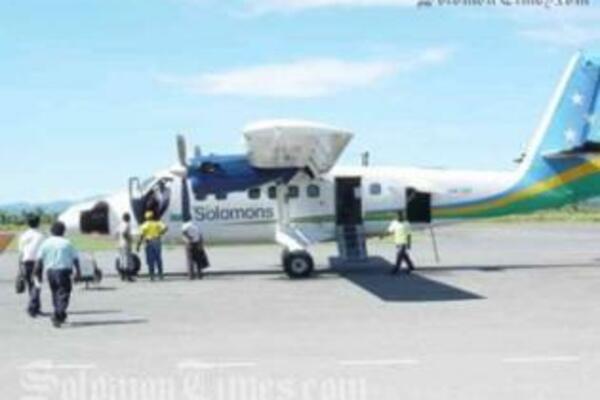 The Dash8 together with the Twin Otters will service the growing demands of Domestic travels.
Source: flysolomons.com
Share
Monday, 30 November 2009 13:03 PM

Solomon Airlines confirmed last week that it has signed a historic agreement to bring a Dash8 aircraft into its Domestic operation from the 7th December and will remain part of its fleet for a longer term.

This aircraft will be leased from Airlines PNG, a privately listed company on the PNG Stock Exchange which was previously owned by the Wild family, long time residents in PNG since the early 50's.

The lease is for a period two (2) years with a further option of two further years subject to the continued expansion of capacity to be equally met by the traffic demand internally.

"The aircraft will give Solomon Airlines the added capacity required to meet the growing trends indicated on its Domestic route and will allow for future capacity expansion to handle larger volumes of Tourism expected in the coming years," an airline spokesman said.

"Naturally, and as a flow-on effect of our decision to secure a dedicated Airbus A320 service between Brisbane and Honiara, it goes without saying that our Domestic capacity must be equally grown to ensure that the 'feeds' into and out of our Domestic routes has to be somewhat matched by the larger capacity from/to Australia."

"The beginning of the Dash8 aircraft into Solomon Islands was trialled in 2003/4; where Airlines PNG also supplied a Dash8 aircraft for short periods of time and this proved popular and effective but, this was not followed through to a longer term arrangement due to the Tension' period and a slowing in the Economy". The airline indicated.

"More recently, in January and February of 2009, the airline brought in a Vincent Aviation Dash8 aircraft from New Zealand which also proved popular with our domestic market travellers. This was again only to meet the peak after Xmas seasonal demand." The spokesman continued.

The airline however indicated that for this aircraft type to become a long term financial and economic success, the Government must continue to play its role in the development of better Tourism infrastructure including better upgraded runways for the prime airstrips already identified for the Dash8 being: Seghe; Munda and Gizo in the west; as well as Auki; Kirikira and Santa Cruz in the north/east.

In addition, the airline is pushing to get access for the Dash8 aircraft into Taro (Choisul) as well as Suavanao (Ysabel) and Rennel (Renbel) and possibly Marau to the east of Guadalcanal.

This will ensure that the aircraft is able to fly longer hours and reduce its overall operational costs with other airstrips available.

Naturally, the airline added, these other airstrips are primarily located in areas where there is Tourism development and these need upgraded services with an airliner standard of aircraft but it also means that current resort developers are able to confidently plan into the future with a better level of service standard by the National airline.

"We need all of Solomon Islands and the business/corporate market and Government to get onboard this added new development to ensure we move forward with one of our main assets in this country being Tourism; and not forgetting the Governments call to commence replacing the logging revenues with Tourism" the Spokesman said.

The airline spokesman said that the new schedule, now ready to be implemented from the 7th December, will be circulated next week and be available for bookings and will see an operation of daily and twice daily flights to the west followed by 3 to 4 flights weekly to Auki and twice weekly to Kirkira and Santa Cruz from Honiara.

"This airliner standard of aircraft will be catering for up to 36 seats with a toilet in the forward cabin and some basic catering including juice and biscuits as well as Coffee and Tea on the longer flights together with a flight attendant to assist and service our travelling customers." The spokesman said.

'Progress is now upon us; and the airline is making this huge commitment and encourages the people and Government to follow suit with investing in our Domestic development and resources now being undertaken as a future investment for our people and country. We do not expect quick fixes or a massive turnaround in the fortunes of Solomon Airlines but careful planning and a tight control of expenses will allow the airline to grow its business given the right opportunities and support." The airline summarised.