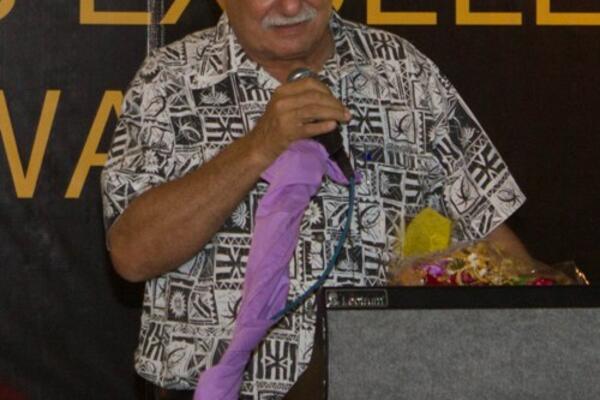 SolAir's General Manager Commercial and Operations, Mr. Gus Kraus said “the award has encouraged the airline to work even harder to improve the quality of its service and business to all who use its services and encouraged the staff to get on board to give their best."
Share
Tuesday, 26 March 2013 07:50 AM

Winning the Prime Minister’s Business of the Year Award capped a successful night for the national carrier that saw Solomon Airlines walk away with the Business Contribution to the Community Award, Most Innovative Business Award and the airline was co-runner up in the Green Award.

In receiving the Business of the Year Award from Prime Minister Gordon Darcy Lilo, the Airlines’ General Manager Commercial and Operations Gus Kraus said “the award encouraged the airline to work even harder to improve the quality of its service and business to all who use its services and encouraged the staff to get on board to give their best."

Kraus says the award was a special one for the Airline, its board, management and staff following the celebration of the Airline’s 50th anniversary last November.

“The last 12 months has been a big one with the airline reaching a new phase in its life with the opening of our new headquarters in Henderson and the purchase of our new Dash 8 aircraft.

“We work really hard at the airline to improve our schedule reliability and services to our travellers and it is never as easy as it appears, with weather issues or runway issues, the airline gets the blame but we persist to ensure we recover from disruptions and communicate as best we possibly can.”

Kraus says Solomon Airlines has been working hard to improve its operations following the ethnic tension period and began a rebuilding process in 2007 under the leadership of CEO Captain Ron Sumsum.

“We are very grateful for the recognition we have received from the business community and I would like to urge other businesses to take part in these awards by telling their story.”

In the category of contribution to the community the airline has been active in its in-inflight collection for infants which is run in support with the Rotary Club of Solomon Islands which has raised $130,000 since it started in the second quarter of 2012. Other charity work include $140,000 raised for the Airline’s 50th anniversary fundraising drive for the National Referral Hospital’s Gynaecology and Emergency Ward which was tied in with the charity work for Solomon Airlines Miss Solomon Pageant. These efforts are apart from its weekly efforts through participation with other organisations and their fundraising efforts in which the airline; gives through the value of its air ticket prizes and raffles amongst those mentioned.

In the Green Category; Solomon Airlines was recognised for its new energy efficient headquarters at Henderson which will be fully sustainable by next year including the use of solar powered air conditioners and the rolling out of its new Green policy.

For Business Innovation; the airline was recognized for adopting new technology such as the Airbus A320, its new Dash 8 aircraft, energy efficient office, its new in-house training scheme, and its innovative partnership with its staff union.

The Prime Minister’s Award winner was chosen by a select panel of Chamber appointed judges based on the most outstanding nominations across all categories.