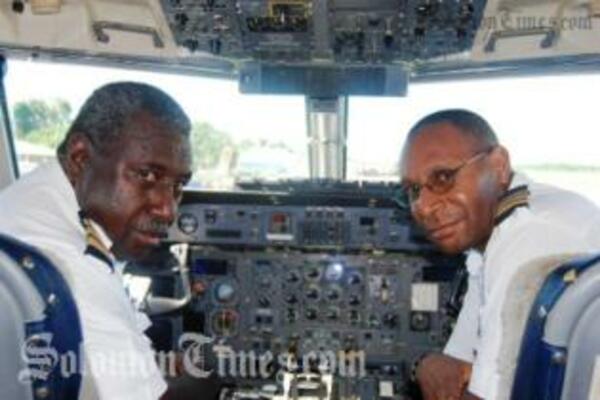 Solomon Airlines are proud to confirm that their very own Pilots are now qualified on the Dash 8 aircraft as First Officers.

Captain Scott Gamiandu was the first one to qualify and returned to active duties flying the Dash8 in Solomon Islands from March this year after training with Airlines PNG for some 3 months.

"Captain Gamiandu is doing so well according to the other Airlines PNG Captains he is flying with that we will be recommending to Airlines PNG that after he completes his mandatory aircraft type experience, he should be up for his Command/Captain's endorsement on the Dash 8 aircraft. This is expected in the next month or so and further training in PNG will be required to move from the right seat to the Captain's seat on the left," an airline spokesman said.

Captain Gibson Galo, the Chief Pilot of Solomon Airlines has also recently returned from PNG after some months of training by Airlines PNG.

The basic training involved revalidating their PNG CAA Licence and also ground schools to understand the basic requirements of the aircraft then onto simulator trainings in Melbourne.

Solomon Airlines indicated that "this is the beginning of a new era in qualifications of this aircraft type in our Domestic market and will pave the way for future fleet planning for Solomon Airlines."

"We are proud of our two new Dash 8 qualified pilots and together with our already three approved Flight Attendants; we hope that the next stage of development is to seek Command Training for Captain Gamiandu followed by Captain Galo when he has completed his mandatory time on this aircraft type." The airline confirmed.

"Very soon we hope to advise on the training requirements of our engineers to achieve Dash8 Engine and Airframe as well as Avionics conversions. The Dash8 has one of the larger turbo prop engines with the Pratt & Whitney PW120 engines whereas the Twin Otters operate the PW 27 engines."