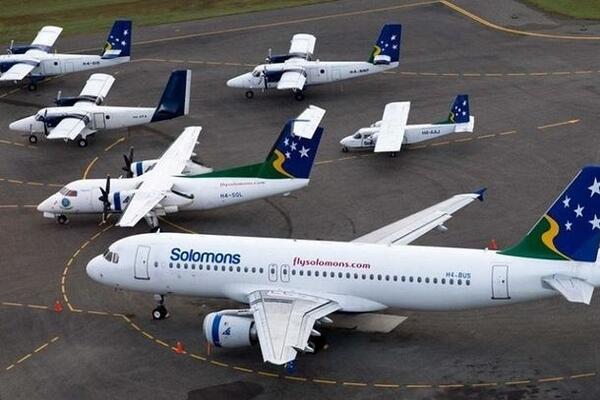 “While thousands of airlines around the world have gone out of business due to no revenue and grounded aircraft, Solomon Airlines has shown fortitude,” he added.
Source: Gotravelthepacific.com
Share
Wednesday, 28 April 2021 10:07 AM

Solomon Airlines newly appointed Chairman Mr Frank Wickham said today he was very confident of a sustainable future for the national carrier, despite financial challenges created by the COVID-19 pandemic and closure of international borders.

“Solomon Airlines has shown resilience and succeeded against the odds,” Mr Wickham said.

Speaking at his first media conference since appointment as Chairman in February, Mr Wickham, who is also a Director of Investment Corporation of Solomon Islands (ICSI), acknowledged the airline’s team, the difficulties faced during COVID-19 and discussed the airline’s future.

“It is a credit to Solomon Airlines management and team that the company achieved a successful turnaround between 2017 to 2019, and has now endured global aviation’s most difficult year,” he said.

“While thousands of airlines around the world have gone out of business due to no revenue and grounded aircraft, Solomon Airlines has shown fortitude,” he added.

“Prior to COVID-19, they had successfully pursued a strategy which returned the airline to profitability, improved efficiency and were building a stronger national carrier for the future.

“By 2019, traffic on the newly opened Brisbane-Munda international route was growing, total inbound tourism to Solomon Islands had grown by 3% and was on track to grow by at least 6% in 2020.

“The airline had taken delivery of a new international aircraft, finished refurbishment of the old Twin Otters, completed the search for a replacement Twin Otter with greater cargo and passenger load capability.

“In a major IT advancement, Solomon Airlines reservations system was successfully extracted from Qantas and a more modern version put in place, which has now been extended to most of our airports on the islands.

“The Solomon Islands Tourism Infrastructure Development Fund (SITIDF) was established to help resorts to upgrade their rooms by providing interest free loans. This initiative was driven by Solomon Airlines with funding largely provided by the New Zealand Government.

“Since COVID-19, the funding not used for development has been given to operators over the past year to help them keep going while international borders are closed and domestic tourism is developed.

“By the end of 2019, Solomon Airlines was ideally positioned for growth in 2020 but like all airlines, did not expect the the consequent collapse of the aviation and travel industry due to COVID-19.

“Even in light of the challenges and losses being sustained, the airline has maintained regular scheduled domestic flights to all ports throughout the Solomon Islands and has made the majority of its revenue by actively seeking international charter work.
“While borders remain closed and scheduled international flights are suspended, Solomon Airlines has operated numerous Government approved charter flights to Australia, New Zealand, Australia, China, Philippines, Fiji, Vanuatu and Tonga.

“Our national carrier is resilient and looking forward I am very confident of our sustainable future. We are turning a page, with the distribution of the world’s first COVID-19 vaccinations now occurring and commencement of travel bubbles within the South Pacific region.

“Solomon Airlines has survived through careful management of costs, the goodwill of creditors, strong Government support in the form of a concessional loan and stimulus grant, domestic tourism initiatives and securing charter work for the A320 aircraft.
“While it is still probably a year before we can return to normal operations and profitability, our focus now is on shoring up continuing financial viability until borders open and the volume of international traffic can again be developed.

“International charters will continue to generate as much income as possible and we will seek to work with our regional airline partners to maximise assistance to each other.
“Like airlines everywhere we are also reliant on ongoing government support, and until borders open we are preparing our fleet, our team and our plans to ramp up our services as soon as we are allowed to do so.”