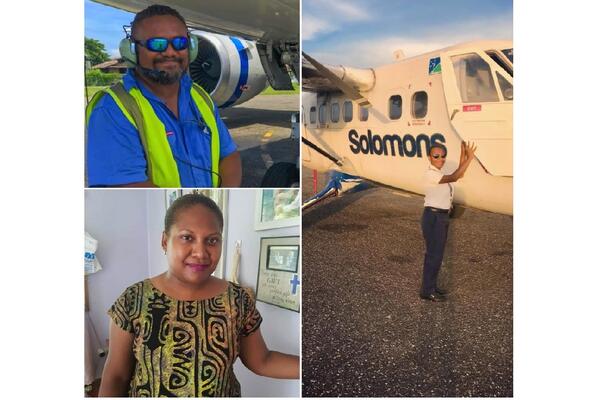 Solomon Airlines is recognizing 'International Day of Families', observed on the 15th of May every year, by sharing some of the family ties that exist between the airline’s current employees and generations past.

International Day of Families was proclaimed by the United Nations General Assembly in 1993.

“It highlights the importance of families in the international community and how strong family ties can help to build strengthened communities, societies and nations,” said Hernandia Zoleveke from Solomon Airlines’ Human Resources team.

“It’s also a day to reflect upon the importance of family inspiration and knowledge passed from generation to generation including in the workplace,” she added.

As a major employer in the Solomon Islands, the national carrier’s 280 employee workforce today includes eight staff who are following proudly in their parent’s footsteps, the second generation of their families to now be working for the airline.

After graduating from USP in 2012 with a Bachelor of Commerce majoring in Management & Public Administration and Tourism Studies, she applied to a newspaper advertisement for Solomon Airlines 22 month Graduate Development programme. Ms Zoleveke was one of three successful applicants and commenced her career with the airline in 2013.

“My father started his career with the airline in 1989 and was also recruited as a trainee from USP and completed the Graduate programme here, rotating through the departments,” she said.

“Today he is Manager Commercial for Solomon Airlines and I currently hold the position of Assistant to the HR Manager. Despite working for the same company, we are in separate departments contributing in different ways to meet the objectives and goals of the airline.

“In the workplace, I normally address my father by his name and not as my Dad. My workmates find this very funny, but I want to treat this as a professional relationship.

“Solomon Airlines is a great place to build one’s career development given the challenges and opportunities it presents.

“I see the company as the best little airline in the Pacific,” she added.

“Working for Solomon Airlines has helped in shaping me to be the best professional I can be and also taught me to be resilient and most importantly to be patient.

“I guess great admiration of these traits can be seen through my Father’s career with Solomon Airlines, starting off as a Traffic Officer and working his way up to become the Chief Executive Officer of the company.

“My dearest mother, the late Mary Morris, was the Personal Assistant to the CEO from March 2010 until her untimely passing away in April 2016.

“Like most of us, I am very proud of Solomon Airlines and I really admire how the company has grown over the years. We are going through hardships in unprecedented times, but I am very optimistic and confident that together we can get through these trying times and grow and develop in the future.

“I always encourage my children to do their best in whatever they want to pursue, if that means following in my footsteps then yes I would encourage them,” he said.

“I hope to serve our national flag carrier for as long as I can and if I have children of my own one day, I’d teach them the same things my father taught me and let them decide as to what profession they’d like to take up later on. Who knows? They might become pilots too,” she said.

“I always knew one day I’d share the same working space with my father since becoming a pilot had always been my childhood dream,” she said.

“It was all thanks to him for taking me to his working environment at an early age that I was inspired to take up the front seat in an aeroplane.

“That pushed me a lot during my studies and training as I wanted nothing more than to make my parents proud, achieve my ambitions and get into the system based on merit. I successfully completed my pilot training and proceeded with the formalities everyone goes through when seeking employment.

“I have been employed by Solomon Airlines now for four years, as a First Officer on the DHC-6 Twin Otter, flying in the domestic operations; one of my biggest achievements in life so far.

“My father passed away late last year (2019) and I was fortunate enough to spend the last three or so years working with him and wished it could have been more. The best highlight of my job then and I would say for the both of us, was flying him to some of the Provinces when he was on duty travel.

“I’ve learned a lot from him and he has always been my main critic, frontier supporter, motivating me to always work hard and be my best. Something I miss about him not being around any more.

“I can never match up to his wealth of knowledge and experience in this industry, but it is something I aspire to become better at too.”