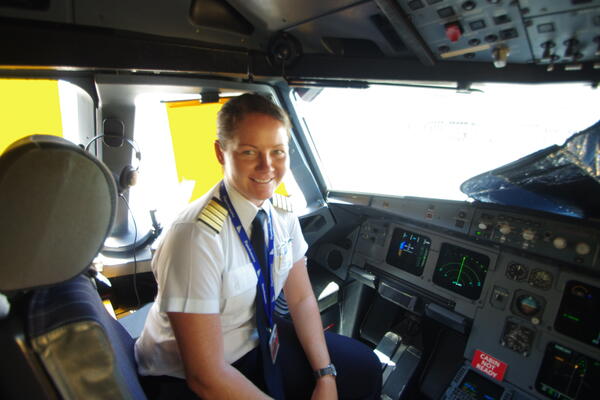 A New Zealand national, Captain Walding has been piloting Solomon Airlines’ Islander and Twin Otter aircraft since joining the carrier in 2000.

Her attainment of an Airline Transport Pilots License allows her to take the helm of the carrier’s A320 flagship, in the process becoming Solomon Airlines’ first female pilot to realise this achievement.

Describing Captain Walding’s appointment as a benchmark moment for the carrier’s equal opportunity development for its female pilots, Captain Sumsum said her success represented a major achievement especially in the context of a traditionally male dominated Melanesian environment.

“Since joining us Claudia has never looked back,” Captain Sumsum said.

“She is an inspiration to her gender, having the right mindset to turn a long term potential goal into a reality.

“Congratulations must go to Claudia for her determination to rise to the occasion and lead from the front - literally the front of the cockpit - in her quest for high achievement.”

Captain Sumsum said Claudia’s accomplishment would act as an inspiration for the airline’s other female pilot, Captain Linda Tito who currently flies the airline’s Islander aircraft and acts as first officer on board Twin Otters.

“As a close friend, Claudia’s achievement will certainly inspire Linda,” he said.

“Linda is currently undertaking additional studies in Australia as part of an aviation degree while at the same time seeking to achieve her Airline Transport Pilots License.

“Once she has achieved this, she too will eventually take command of our larger aircraft including the Dash-8 and the Airbus.”

The ITC course, conducted in the airline’s Henderson Airport training facility, is seen as instrumental in Captain Vonseu achieving his D category Flight Check Approvals for the Twin Otter, in the process enabling him to become a Twin Otter training captain assisting Chief Pilot, Captain Geoff Posala in his role as currently the only Check & Training pilot in the airlines’ domestic fleet.

Captain Steven Aumanu will achieve the same category, which will eventually qualify him to become the second Check & Training pilot for both the airline’s Twin Otter and Islander aircraft.

“We wish all these inspirational pilots all the best in their flying career and look forward to their continued development and contribution to our National Airline,” Captain Sumsum said.