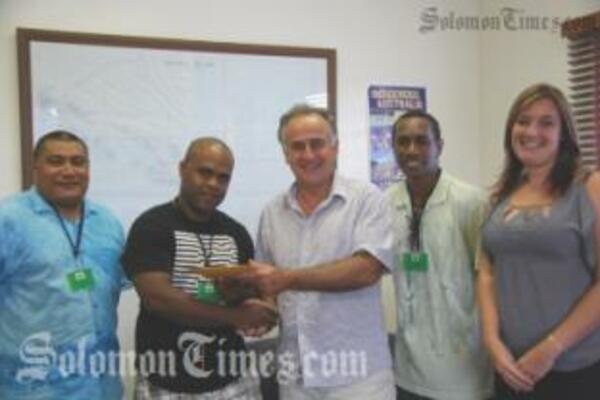 As excitement builds in Solomon Islands in the lead up to the 2010 Solo Icon semi final, excitement is also building for the 2009 Solo Icon winner, Jeddy Dyer, who will travel to Australia this week to record his first album.

Jeddy Dyer won the title of 2009 Solo Icon, after his amazing performance of self-composed song "Say No". Over the past year, he has been developing his music and composing songs, in preparation for his once-in-a-life-time opportunity to record at Woodhead Studios in Australia.

Jeddy Dyer will depart for Australia on July 29, to spend a week in Brisbane and the Gold Coast with Hardrush Music Producer, Kelvin Fahey, recording his debut album.

Mr Fahey has described Jeddy Dyer as "one of the Hardrush Music's leading new R&B/pop artists", a quality singer and performer, who will have a long career in music and entertainment.

Earlier this week, Jeddy Dyer met Australian High Commissioner, Frank Ingruber, who handed over the tickets and schedule for the visit.

Mr Ingruber said that he was very pleased to have the opportunity to meet one of the bright talents of Solomon Islands.

"Having watched the Solo Icon competition intensify over the past months and seeing the strong public support, I am very happy that the Australian High Commission can support competition, promote the talent of Solomon Islands youth, and give Jeddy Dyer an opportunity to pursue his dreams".

Jeddy Dyer said that it was a great honour to be chosen to travel to Australia and he looked forward to making the most of this opportunity.

Jeddy Dyer's airfares were kindly donated by Pacific Blue. Solo Icon is organised by Global Youth Leadership Nexus, in partnership with the Australian High Commission and Ministry of Women Youth and Children's Affairs.