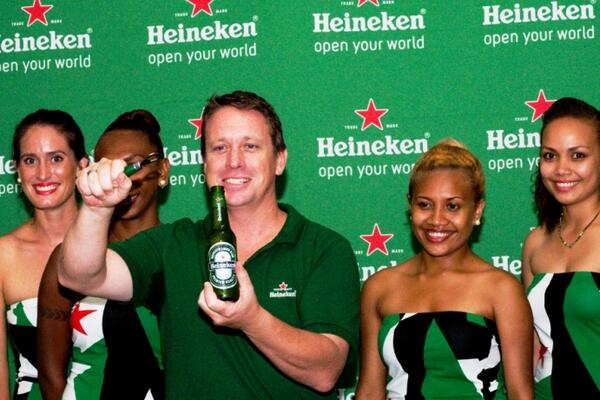 Following the earlier celebrations around its anniversary, SolBrew is happy to celebrate its 20th birthday with an extension of its portfolio: the introduction of the Heineken® brand.

The guest list for the World Premiere event was a who’s who of Honiara, with prominent residents of Honiara and distinguished guests such as local sport star Michael Leong (Pro Tennis Player) and Elliot Ragomo (Futsal captain). Guests brought their silver cased invitations to the event, and these cases were re-packed to include one of the first bottles of Heineken® to be available in the Solomon Islands, which they were able to take home at the end of the event, together with more Heineken® goodies. The suitcase represents Heineken®’s global journey, arriving in the Solomon Islands after travelling to 178 countries around the world. At the event, the guests enjoyed the first bottles of Heineken® to arrive in the Solomon Islands, and were entertained by an international DJ from Australia at a scene that could have been a snapshot of an event in any other cosmopolitan city in the world.

SolBrew – Solomon Islands very own – this year celebrates its 20th anniversary. Over the past 20 years SolBrew has built a strong reputation for high quality products, sold throughout Solomon Islands and now exported to the South Pacific. As the Solomon Island economy grows, consumer demand for more international premium products will also grow, and Heineken®, as the world’s number one premium beer, is a welcome extension to our much loved SolBrew portfolio. SolBrew, with its strong reputation for quality beverages and great understanding of the local market, is perfectly placed to introduce a brand with a global status like Heineken®.

The Heineken® story began more than 140 years ago in 1864 when Gerard Adriaan Heineken acquired a small brewery in the heart of Amsterdam, the Netherlands. It was a small country of natural born explorers who experienced that if you are open to the world, the world is open to you.

In 1869, Gerard Heineken decided to switch from traditional top fermentation to the Bavarian method of bottom fermentation, a totally different technique that produces a clearer, purer beer. The beer is known for its quality; it is referred to as ‘Gentleman's Beer’. In the worlds of Gerard Heineken: “I want to create a Pilsener unsurpassed in taste, clarity and color.”

1886, Doctor Elion, a student of Louis Pasteur, developed the A-yeast strain, still used today to give Heineken® its characteristic flavour.

Today available in over 178 countries around the world, Heineken® is brewed with the same recipe, great care, and high-quality ingredients. The ingredients of the Heineken® beer are barley, hops, water, our secret A-yeast, plus the skill of our brew masters. The result is a refreshing, thirst-quenching lager beer with a distinct but smooth taste and an alcohol content of 5%.

Heineken® with its worldly heritage and progressive attitude is perfectly placed to empower its drinkers to demonstrate their openness to new experiences, their confidence and resourcefulness, and to show men everywhere exactly what it means to open your world.

Solomon Islanders might already know Heineken® from its sponsorship activities around the world. Heineken® has been one of the main sponsors of the UEFA Champions Soccer League, the most prestigious football platform for international football stars and their clubs. Apart from soccer, Heineken® has a long-standing association with international rugby. Heineken® has been worldwide partner and official beer of the Rugby World Cup since 1995 having been involved in South Africa in 1995, Australia in 2003, France in 2007 and New Zealand in 2011. A third sponsorship platform for Heineken® is Film. Heineken® has a long, strong and successful relationship with James Bond and Heineken® is Bond’s preferred beer in the latest movie ‘Skyfall’.

Try a Heineken when you are next out socialising with friends and remember to “Drink Responsibly”.