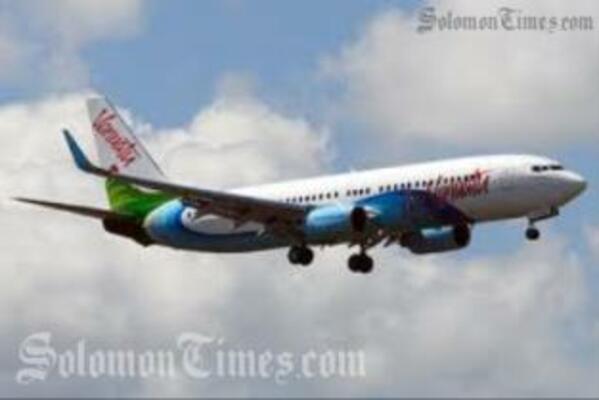 Under the new partnership Solomon Airlines will codeshare with Air Vanuatu on its flights from Honiara to Port Vila and onto Nadi.
Source: airplane-pictures.net
Share
Monday, 12 November 2012 07:57 AM

A new partnership with Air Vanuatu has opened up the the way for Solomon Islands national carrier Solomon Airlines to fly further into the region.

Under the new partnership Solomon Airlines will codeshare with Air Vanuatu on its flights from Honiara to Port Vila and onto Nadi.

The airline's General Manager Operations and Commercial Gus Kraus, says it's a taste of things to come as the airline looks to expand its services.

"We are excited that we will be flying to Vanuatu and onto Fiji and back under this new partnership."

According to Kraus the new code sharing arrangement is an important milestone and one that comes as the airline prepares to celebrate its 50th anniversary with the purchase of its own dash 8 aircraft and the opening of its new office complex on Wednesday 14 November.

Kraus says collaboration between airlines in the region is vital to ensuring that customers get the best service available and at the same time allow airlines to continue to operate.

Solomon Airlines has also been holding ongoing negotiations with Air Niugini to codeshare on a Honiara to Port Moresby service.

With Solomon Islands' traditional ties to Papua New Guinea, Kraus says its only natural that the two national airlines should collaborate in the best interest of their customers.

Talks have been ongoing for a number of years with Air Niugini citing the Independent Consumer and Competition Commission as the main obstacle to a code sharing agreement for the Honiara to Port Moresby service.

"For whatever reasons, Air Niugini has implied that the ICCC is an issue for them but certainly with our Melanesian brotherhood I don't see this as a major obstacle."

Solomon Airlines partnership with Air Vanuatu comes as the national carrier prepares to mark its 50th anniversary on Wednesday 14 November with the arrival of its new $40million dash 8 aircraft.

The plane was purchased from Greek airline Olympic Airways and is scheduled to begin flying domestic services by the end of next week.

The dash 8 has been described as Solomon Airlines' and the aviation industry's biggest investment in history.

The 36-seater will arrive in the country at midday on Wednesday.

As part of its 50th anniversary, the airline will also open its new head office at the Henderson Airport cargo terminal.

The new office complex will house the airline's staff in a single centralized location.

Prime Minister Gordon Darcy Lilo will be the chief guest at the opening of the office complex and the arrival of the dash 8.