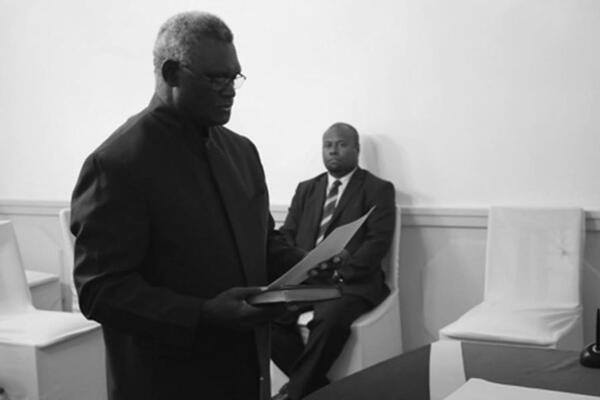 Manasseh Damukana Sogavare has been sworn-in as Solomon Islands new Prime Minister by the Governor General Sir Frank Ofagioro Kabui at Government House immediately after his election by Members of Parliament.

Mr Sogavare was voted into power at Parliament House, polling 34 votes over his rival Matthew Wale in the 50 seat Parliament.

This will be Mr Sogavare's fourth time to serve as Prime Ministers, his previous stints being in 2000, 2006 and most recently in 2014.

Mr Sogavare served in the National Parliament as Member for East Choiseul beginning in 1997. Mr Sogavare is now the longest serving Member of Parliament, this being his sixth term.

Mr Sogavare's victory was not without controversy.

His main opponent, Matthew Wale, argued Mr Sogavare may not be eligible to be Prime Minister because he registered his political party late.

The High Court ordered the contest for the position should be postponed, but Governor-General Sir Frank Kabui used constitutional powers to press ahead with the vote.

Mr Wale and about 15 supporters responded by walking out.