Sogavare Sworn in as Prime Minister 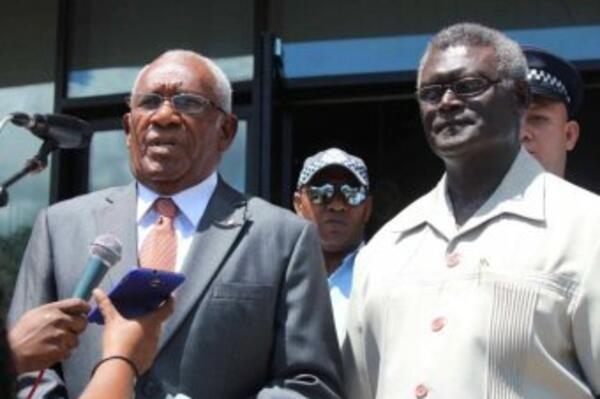 "To all our traditional partners, and overseas friends, and RAMSI (Regional Assistance Mission to Solomon Islands), we all recognize the challenge that lies ahead in building a stronger Solomon Islands," he said.
Source: Photo supplied
Share
Wednesday, 10 December 2014 09:55 AM

Prime Minister Manasseh Sogavare has been sworn-in before the Governor General Sir Frank Kabui at Government House after his election victory.

He took his Oath for the due execution of the Prime Minister’s Office and Oath of Allegiance before members of the Democratic Coalition for Change (DCC) and members of the diplomatic corp.

Members of Parliament have elected Mr Sogavare as the country's new Prime Minister in a secret ballot which he won by 31 votes to 19 against his contender Jerry Manele.

It will be the third time Mr Sogavare has held the top job.

Speaking after the vote, Mr Sogavare said he would work hard to rebuild the nation's dire economy.

"We need to prime pump our economy, this can be done through big overseas investment ... and capital injection," he said.

"We must fix the economy if we are to have any legacies afterwards."

He said he wanted the country's government to build stronger partnerships in the region.

"To all our traditional partners, and overseas friends, and RAMSI (Regional Assistance Mission to Solomon Islands), we all recognize the challenge that lies ahead in building a stronger Solomon Islands," he said.

"And we can only achieve that by working together. This is the task that demands a collective effort."

He said he would announce his deputy and cabinet ministers in the coming days.

The government would also work on a policy framework over the next 100 days, he said.

Mr Sogavare, backed by the Democratic Coalition for Change is member for East Choiseul constituency since 1997.