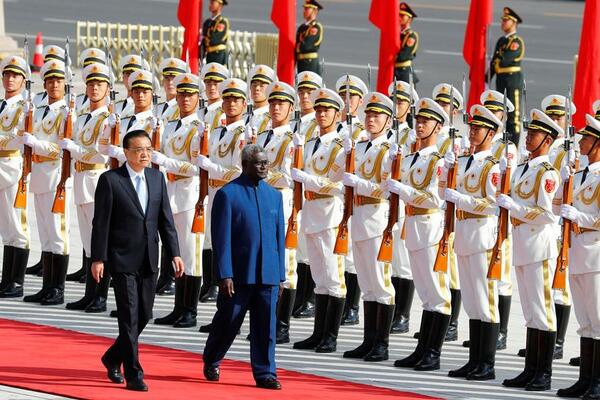 “We know our boundaries, and we will not do anything that will cause unnecessary discomfort to our partners in the region and as a member of the forum,” Sogavare said.
Source: Reuters
By Samson Sade
Share
Tuesday, 29 March 2022 14:26 PM

Prime Minister Manasseh Sogavare says the draft security agreement with China that was leaked to social media has been finalized.

He says the process of having it signed will be facilitated by the Ministry of Foreign Affairs and senior officials on both sides.

He says that Solomon Islands security arrangements with Australia remains intact, and that our traditional security partners are always important to the country.

“But in moving forward it is clear that we need to diversify our relationship with other partners, and what is wrong with that?” Sogavare said.

“We find it insulting to be branded as unfit to manage our sovereign affairs, and that we have other motives in pursuing our national interests.”

The Prime Minister also rejected media reports that the security agreement will serve as a doorway for China to establish a military base in the Solomon Islands.

“We know our boundaries, and we will not do anything that will cause unnecessary discomfort to our partners in the region and as a member of the forum,” Sogavare said.

He insists that the security and development challenges facing the country is such that the country must diversify its partnership with any and all bilateral friends.

Member of Parliament for West Are’are John Mane reminded the government that in terms of its policy of friends to all and enemy to none, and in what now appears to be a serious push to diversify our bilateral security partnerships, friends in the region will be worried.

Opposition Leader Mathew Wale had earlier raised concerns that the security agreement being pursued by the Sogavare-led government with China will create force projection issues, especially if it covers large military deployments and shore-based facilities.

“These are not small issues and in the current geopolitical competition Solomon Islands would do well not to be the ground on which these big powers play.”