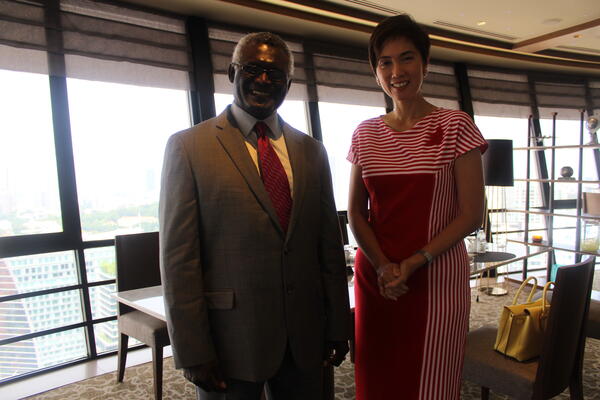 Prime Minister Hon Manasseh Sogavare and Singapore’s Senior Minister of State, Josephine Teo met in Singapore this week to reaffirm their governments’ commitment to the friendly ties between Solomon Islands and Singapore.

Minister Teo met with Prime Minister Sogavare on behalf of the Singaporean Prime Minister Lee Hsien Loong who is on official visit to the United States.

At the meeting held at the Mandarin Orchard Hotel, the two leaders appreciated the opportunity of this face-to-face dialogue to reaffirm their commitment to the friendly ties that exist between their two countries and to further enhancing these ties for the betterment of their citizens.

Prime Minister Sogavare and Senior States Minister Teo touched on Singapore’s Cooperation Programme (SCP) that was established in 1992 to serve as the primary platform through which Singapore offers technical assistance to other developing countries including Solomon Islands.

Prime Minister Sogavare expressed that Solomon Islands Government Officers have benefitted profoundly from the SCP since its introduction and within that context thanked the Singaporean Government for the significant contribution it has made to the development of Solomon Islands through this programme.

Responding to the remarks by the Prime Minister, the Singaporean Senior Minister of State said the SCP is one way that Singapore can make a meaningful contribution to its relations with Solomon Islands.

“We are both small countries and we both want to be heard and make sure that our interests are not always sacrificed. We want to give our people the chance to do well in life.

“These are our common interests and being small, we will continue to take them seriously to ensure that we create conditions that are favourable to our own development.

“These have always been the common aspiration of Singapore and the Solomon Islands so that is why we believe so much in the Singapore Cooperation Programme.”

Prime Minister Sogavare also took the opportunity to inform Minister Teo that he has received a letter from his counterpart, Prime Minister Loong, acknowledging the Solomon Islands Government’s support for Singapore’s candidature for re-election as a Member on the Council of ICAO (International Civil Aviation Organisation (ICAO) at its next session in 2017.

Whilst Prime Minister Sogavare will officially respond to Prime Minister Loong’s letter of appreciation, he told Minister Teo that Solomon Islands is committed to support Singapore’s candidature for re-election as a Member on the Council of ICAO.

He added that Solomon Islands and Singapore are friends and they will continue to work to support each other whenever needed and in whatever possible way they can.

The Prime Minister also used the opportunity to enlighten Minister Teo about the development policies of the government including the establishment of special economic zones to attract major foreign direct investments, adding that the legislation for the accomplishment of this policy objective will be tabled at the next sitting of Parliament.

Another policy objective of the Democratic Coalition for Change Government highlighted by the Prime Minister is land reform to open up land for development. He said the legislation for this initiative would be taken to Parliament in 2017.

Minister acknowledged the policy initiatives of the Democratic Coalition of Change Government as conveyed to him by Prime Minister Sogavare and encouraged him with the development experiences of Singapore.