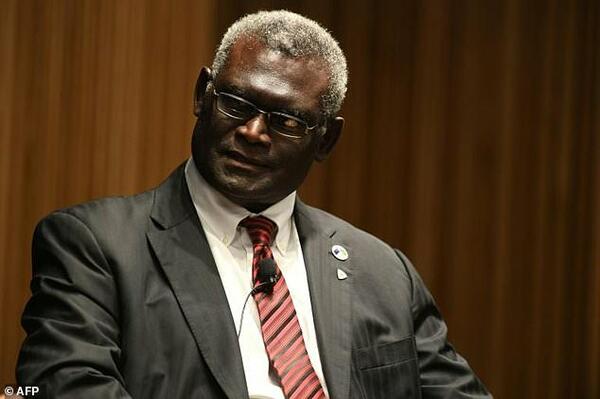 The Prime Minister is said to be given 60 days to switch recognition, failing that a motion of no confidence will be tabled, and he will be removed.
Source: Supplied
Share
Monday, 20 May 2019 10:09 AM

Prime Minister Manasseh Sogavare is said to be under increased pressure from MPs, said to be from both sides of the house, to switch recognition from longtime ally Taiwan to China.

The Solomon Star reports that MPs from Guadalcanal and Malaita are putting a lot of pressure on the Prime Minister, with sources going as far as stating “his leadership depends on it.”

The source also told Solomon Star that the Prime Minister has 60 days to switch recognition, failing that a motion of no confidence will be tabled, and he will be removed.

How such promises were ‘delivered’ to these MPs is not known. Was it a meeting? Are there agents in Honiara acting as go between? It is in the publics best interest that such discussions are made known – are we officially engaging with China as a government? Are MPs advocating a switch on behalf of the government? Was this done before the elections or after?

In an article published in the Nikkei Asian Review Arthur Herman and Lewis Libby of the Hudson Institute wrote that “China is pushing ahead with an aggressive strategy to dominate the so-called first and second island chains to China's east and south.”

The first island chains include Taiwan, but “China is also contesting Japanese control of the Senkaku Islands and building up, and militarizing, islets to bolster claims to sovereignty over parts of the South China Sea - which several experts say is illegal.”

Fourteen independent Pacific island countries lie within the second island chain, with many feeling intense pressure from China to become part of its growing economic hegemony in Asia.

“Consequently, the Oceania region, a vast stretch of ocean with numerous island nations, including Papua New Guinea, Tonga, Vanuatu, Fiji and the Solomon Islands, has taken on an urgent new strategic importance.”

The writers say that the price for going against Beijing's wishes is high. Palau used to be a favorite destination of Chinese tourists as well as investment. When Palau refused to sever diplomatic relations with Taiwan, the flow of Chinese money suddenly shut off, leaving Palau with empty hotels, unfinished construction sites and a mountain of debt to Chinese banks that shows no sign of shrinking.

Solomon Islands Exports to China was US$325.83 Million during 2017, according to the United Nations COMTRADE database on international trade. This makes China one of the largest trading partner for Solomon Islands. Around US$300 Million is from the export of logs, at least 13-15% of the country’s GDP - indicating the overall risk of being harmed by external shocks.