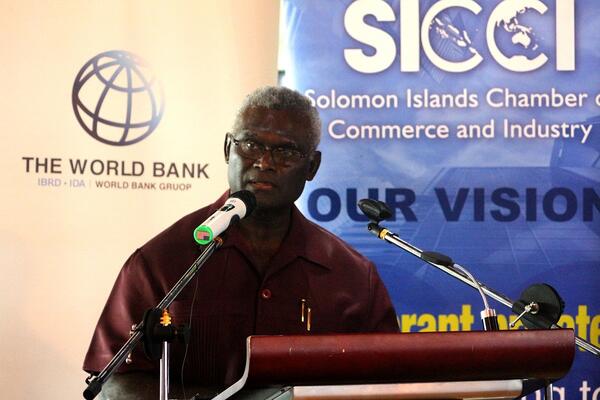 Hon Sogavare was guest speaker at a business breakfast event to celebrate the successful completion and launch of the Waka Mere Commitment to Action report which shows 6,585 employees from fifteen companies in the private sector are now benefiting from more equal, supportive and respectful workplaces.

“I am of the view that Government can also learn from Waka Mere companies.

“We (Government) are the single largest employer in Solomon Islands but we are still a long way from gender equity in many of our leadership positions. The Waka Mere model is something we will be looking to learn from the role model companies here today,” the Prime Minister said.

Waka Mere was designed in close collaboration with Solomon Islands businesses. Its goal was to address social norms that prevent women and men from fully participating in the workforce, thereby reducing business productivity, profitability and reputation.

This initiative was led by the International Finance Corporation (IFC) and the Solomon Islands Chamber of Commerce and Industry (SICCI) with support from the Australia and New Zealand governments.

Prime Minister Sogavare said it is also important to note that Waka Mere wasn’t just about giving new opportunities for women in the workplace.

“It was also about making those workplaces safer and more supportive.

“Solomon Islands has very high rates of domestic violence. We know that this affects the health and happiness of our citizens. It also stunts the economy,” he said.

Waka Mere worked with the participating companies on developing a structured approach to helping employees, both men and women, affected by violence so they could get the help they needed and stay employed.

Hon Sogavare said in Waka Mere the country now has another advocate and another resource in fighting the scourge of domestic violence in Solomon Islands.

“We need more companies to take up the challenge to make their workplaces safer, more equitable, more supportive, and more productive. My government also needs to take up this challenge.

“If we make full use of the untapped potential that exist in the country from every women and men equally contributing to our development, our country will prosper.

“Waka Mere has planted a seed. The seed has sprouted. We are beginning to see the fruits. I call on other companies in Solomon Islands join the Waka Mere team of companies as I commit to also lead my Government to adopt the same principles,” he said.