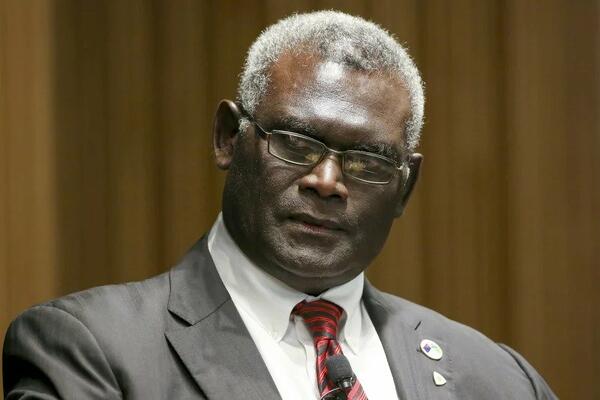 Prime Minister Sogavare has indicated that he will be looking to China to fill apparent security gaps in the country’s national security space, despite assurances made to Australia that they remain the country’s preferred partner.
Source: File: AP
By Jimmy Nolan
Share
Monday, 02 May 2022 12:19 PM

Prime Minister Manasseh Sogavare has taken a veiled swipe against Australia, a regional partner and a longtime friend who has stood with Solomon Islands for many years.

Prime Minister Sogavare in Parliament last week said that the Australian government was being hypocritical over the Solomon Islands security deal with China, saying the AKUS deal was not transparent but he “did not become theatrical and hysterical.”

He says Solomon Islands and other countries in the region “should have been consulted to ensure that this AUKUS treaty is transparent since it will affect the Pacific family by allowing nuclear submarines in Pacific waters”.

Australian Prime Minister, Scott Morrison, defended his handling of the AUKUS agreement with Britain and the United States, stating Friday last week that he spoke to the Solomons Prime Minister the day after the announcement (of AUKUS) “and no issues were raised at that time in that discussion”.

He suggested that Sogavare had changed his view based on “other influences” and that there was a “remarkable similarity between those statements and those of the Chinese government”.

Prime Minister Sogavare has indicated that he will be looking to China to fill apparent security gaps in the country’s national security space, despite assurances made to Australia that they remain the country’s preferred partner.

“Solomon Islands does not subscribe to the view that only a partner or partners of the same ideology is able to do that,” Prime Minister Sogavare told Parliament.

Prime Minister Sogavare said, internally, the consequences of last November riots is around $800 million. 1000 jobs were lost and many more livelihood of our people affected.

He stated, “from last November’s riots, it is obvious, current security agreement with Australia is inadequate to deal with our hard internal threats. The economic impact of the November Riots has nearly crippled Solomon Islands.”

It is not certain what is meant by inadequate, given that Australia responded immediately after the official request was made by the government. The timely intervention led by Australia, and supported by Fiji and PNG, ensured that no further damage occurred, and it also ensured that the rioters did not have their way - Sogavare stepping down as Prime Minister.

On Thursday last week, a key adviser to the premier of the most populous province in Solomon Islands told The Guardian that he is concerned that Sogavare could use the security agreement with China to request “Chinese armed police and military personnel to quash democratic dissent and hold power for years to come.”

With The Guardian and SMH.com.au