Sogavare Calls for Repeat Testing of Those Discharged 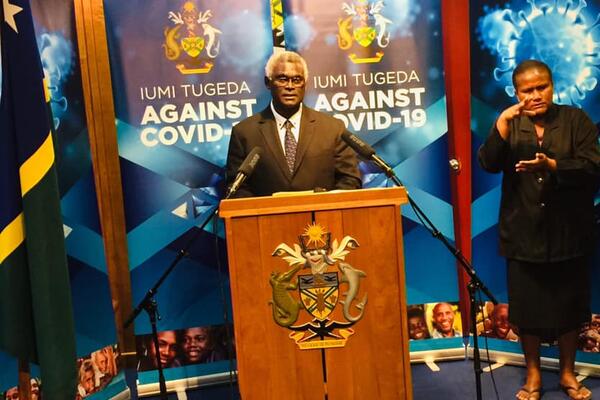 “These prolonged positive cases are telling us that the Covid-19 virus does not just disappear at 10 or 14 days after symptoms subside, or even if there are no symptoms."
Source: File
By Georgina Kekea
Share
Monday, 11 January 2021 16:23 PM

Prime Minister Manasseh Sogavare is urging those that tested positive for Covid-19 and have since been released from quarantine after three consecutive negative tests to return for retesting.

The Prime Minister made the call during his first nationwide address this year, stating that retesting is for precautionary purposes only.

Prime Minister Sogavare says that of the 17 positive Covid-19 cases in the country, 15 have returned negative, and 10 have since been released from quarantine after three consecutive negative Covid-19 tests.

“The two remaining positive cases are soccer players that returned from England on the 5th of October 2020.

“These prolonged positive cases are telling us that the Covid-19 virus does not just disappear at 10 or 14 days after symptoms subside, or even if there are no symptoms.

“Without repeated tests it is more than likely that many Covid-19 positive people could be still positive and infectious when they are released back into communities,” Prime Minister Sogavare said.

Sogavare said that is why those that tested positive for Covid-19 were released only after registering three consecutive negative tests.

He says despite such strict protocols’ health teams are still following up on all previously positive cases that had been discharged after becoming negative on a weekly basis.

“This week health teams wish to conduct follow up checks and take repeated swabs on all ten cases that had been discharged over the past two months to make sure that they are still negative,” Prime Minister Sogavare said.

“As I have alluded to earlier a very small proportion of infected people that have become negative can reactivate. We want to make sure that all the ten people discharged are still negative.”

Sogavare urges those ten people that have since been released to contact the ministry of health to arrange for retesting.