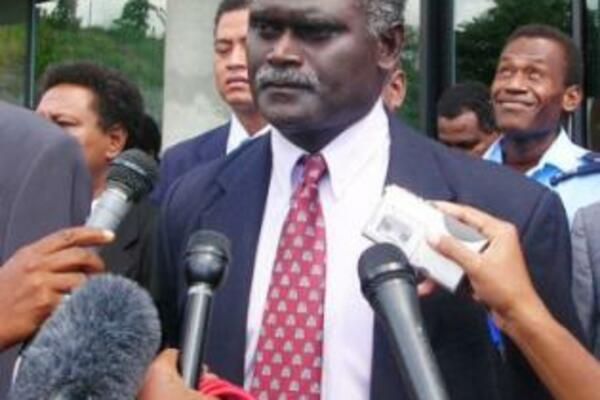 Mr Sogavare says that the public has all the right to vent their frustration in the media since "it is simply an irresponsible decision by the caretaker government."
Source: STO Archives
Share
Friday, 30 April 2010 10:23 AM

Former Opposition Leader and East Choiseul MP, Manasseh Sogavare has condemned the decision by the CNURA Government for the payment of the entire Rural Constituency Development Fund (RCDF)for the country's 50 constituencies for 2010.

The RCDF is being paid through the immediate former Members of Parliament.

Mr Sogavare says that the public has all the right to vent their frustration in the media since "it is simply an irresponsible decision by the caretaker government."

Mr Sogavare says that in the interest of transparency people should know that there are four portions of the development funds that are available to these former MPs.

Mr Sogavare says that the RCDF is the portion of the development fund that is expended entirely on MPs discretion.

"If what was reported is true, it appears that the entire $400,000 of the RCDF money has been paid which means that when the new Member of Parliament may not have the portion of funds for the last quarter of the year under his discretion," said Sogavare.

"It is quite different from the Millennium Fund and Micro Project Fund, administered through the Ministry of Rural Development and Indigenous Affairs, which is based on applications endorsed by MPs."

Meanwhile, Mr Sogavare says this irresponsible decision by the caretaker CNURA Government and "must be fully condemned by every right thinking Solomon Islander."

Mr Sogavare says outgoing and incoming MPs must appreciate that they are only custodians of these financial resources on behalf of the people.