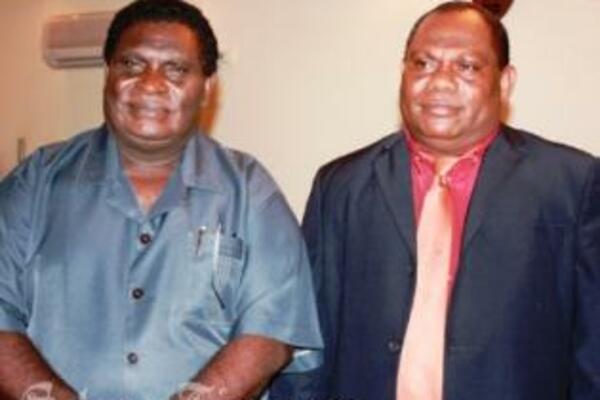 Minister Sofu says that he has regained confidence in Prime Minister Danny Philip after having consultations with him recently.
Source: Photo Supplied
Share
Monday, 21 February 2011 12:32 PM

MP for East Kwaio Constituency Stanley Festus Sofu has further strengthened the NCRA government after being sworn-in as Minister for the Ministry of Public Service this morning.

Minister Sofu resigned from the portfolio three weeks ago but decided to rejoin the NCRA Government after consultations with his constituents.

Immediately after being sworn-in, Mr Sofu said his decision to rejoin government "is based on national interest and that is to see the 2011 budget passed in parliament."

"I feel very strongly that this country must move forward and the budget is a key element in moving government programs forward," Mr Sofu said.

The budget session begins on March 28.

He said recent political events have created confusion among the public and his switch to government is important to strengthen government numbers when the 2011 budget is debated.

Although he did not disclose other reasons for his recent switch to Opposition, Mr Sofu said individual MPs have the right to decide which side of the house they should team up with.

Minister Sofu added that he has regained confidence in Prime Minister Danny Philip after having consultations with him lately.

Sofu's return to Government has further increased the numerical strength of the NCRA government to 27 MPs against the Opposition's 21.