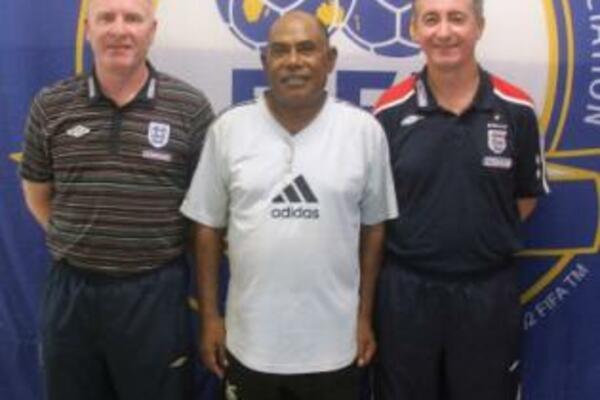 It was scheduled to start on Tuesday but changes in the travel arrangements of the course instructors resulted in the late start.

Thirty course participants have been selected to attend the training program. The program is being run under the SIFF and FA Memorandum of Understanding signed in 2006. The MOU covers technical development areas including: Elite Player Development; Goalkeeper Coaching; Youth Coaching; Women and Girls Football; Referee Instruction.

The FA, according to the MOU, sponsors an annual supply of football kits and footballs for use in FA training programs held in the country. The same program has also facilitated training for senior players in England. Commins Menapi and Gideon Omokirio were 2 of the most recent beneficiaries under this scheme. This is the third year for the program in Solomon Islands. Similar programs were held in 2007 and in 2008 and the final training program under the current MOU will be held next year (2010).

According to the SIFF Development Officer, Noel Wagapu, the FA training programs are in line with SIFF's national football development plans and also complements developmental aims of the Oceania Football Confederation (OFC). Wagapu explained that the focus for this year's program is for the development of grassroots players, hence, the beginner's and junior courses selected. Wagapu also appealed to the selected coaches to ensure that they make use of the opportunity being provided and to gain as much as they can.

The 2 course instructors, John Allpress and Chris Dawham arrived from England yesterday. They will be leading the course in collaboration with the SIFF Development Office. The SIFF Development Office is also responsible for identifying participants for the course based on the official database of coaches and nominations from the Provincial Football Associations affiliated to SIFF.

All course participants will be awarded with certificates as according to the course that they attended.