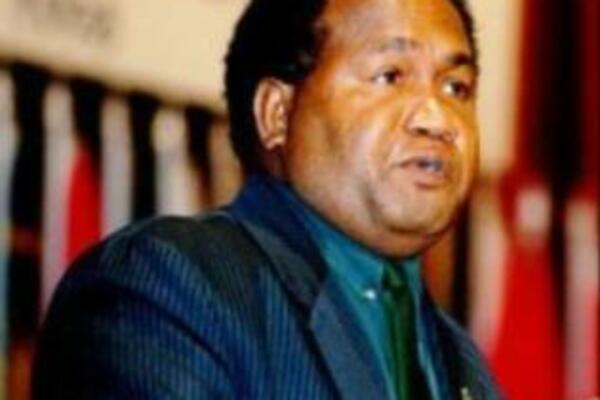 Sasako alleged Sir Trevor's candidacy never came before the awards and honours committee - that he was wrongly credited for the 10 bed arrangement at Saint Vincent hospital.
Source: STO Archives
Share
Wednesday, 16 June 2010 09:15 AM

Sir Trevor has made his intentions known through a Sydney-based freelance journalist, Susan Merrell.

He says Sasako had defamed him in a letter to the editor, printed in yesterday's Solomon Star.

He says Sasako also defamed Government House and all the people in Australia who work hard to achieve positive outcomes for sick Solomon Islanders who go to Saint Vincent hospital in Sydney for medical treatment.

In his letter to the editor, Sasako implied Sir Trevor was not a worthy recipient of the Knight of the British Empire or KBE award - announced by the Governor General at the Queen's birthday parade last Friday.

Sir Trevor received the award for services to the development of Solomon Islands.

But Sasako alleged Sir Trevor's candidacy never came before the awards and honours committee - that he was wrongly credited for the 10 bed arrangement at Saint Vincent hospital.

He claimed the award may have breached Australian government rules which forbid Australian nationals from receiving imperial awards from foreign governments.

Sasako also said there were serious allegations of impropriety against Sir Trevor by some Solomon Islands' male patients who attended St Vincent's Hospital under the 10-bed arrangement.

Sir Trevor says he has sought advice from the Police Commissioner in Solomon Islands and will seek further instruction from the Director of Public Prosecutions on laying criminal libel charges against Sasako.

Meanwhile, the executive director of Saint Vincent hospital in Sydney Jonathan Anderson has refuted claims by Sasako that Sir Trevor is not important to the hospital's 10 bed program.

Mr Jonathan says without his support, the hospital could not continue to support the patients.

A sister of charity - sister Claire Nolan who works on the program spoke highly of Sir Trevor's involvement.

She says Sir Trevor advocates for the patients so effectively with the medical specialists.

Sister Claire says he gives his time and energies in attending to the patient's daily needs.

She says in the years before the 10 bed program was formalised - and before it was adequately funded, Sir Trevor provided for the funding shortfalls from his personal funds.

Sister Claire says she did not see many people doing what Sir Trevor does.