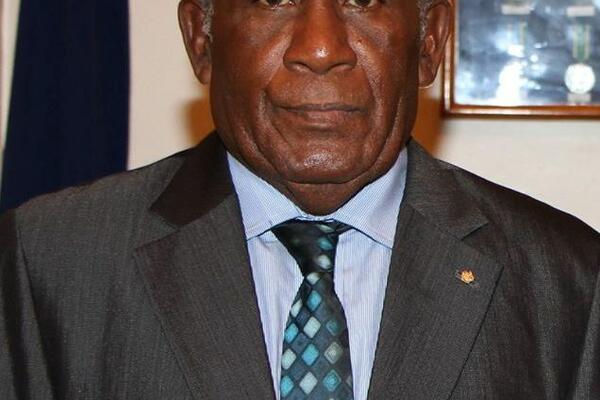 Sir Frank won by an absolute majority of 23 votes against his closest rival, Andrew Mua who polled 21 of the 44 votes cast by members of Parliament.
Source: Photo supplied
Share
Tuesday, 06 May 2014 16:05 PM

Governor General Sir Frank Kabui has been re-elected for a second term today after 4 rounds of voting at the national parliament.

Sir Frank won by an absolute majority of 23 votes against his closest rival, Andrew Mua who polled 21 of the 44 votes cast by members of Parliament.

The third candidate Archbishop David Vunagi of the Anglican Church of Melanesia was eliminated in the first round of voting.

Sir Frank was first elected on 15 June 2009 in a similar round of voting.

He is from Manakwai Village, Malu’u in North Malaita. He graduated with a law degree from Papua New Guinea in 1975 and became the first local Solomon Islander to be appointed Attorney General in 1980.

He held the position for 14 years and was elected Chairman of the Law Reform Commission in 1994. In 1998 he was appointed High Court Judge and retired in April 2006 when he turned 60. In the same year he was appointed Chairman of the Law Reform Commission and has held the position until his first election as Governor General in 2009.