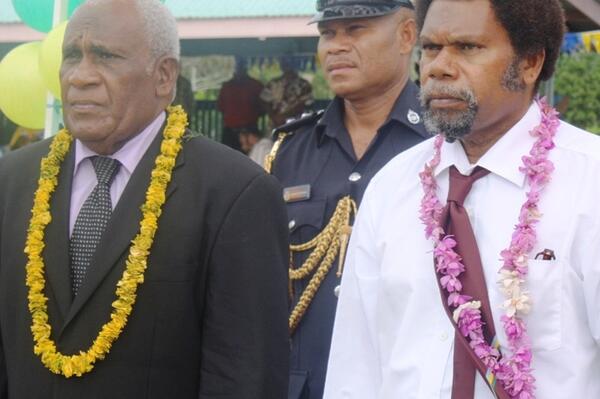 “This is an important day to you because it marks the devolution of certain powers to your Provincial Government following the introduction of the provincial system of government in 1981. It is a day that allows you to reflect on your past achievements and challenges that lay ahead of you in your Province,” Sir Frank said.

Temotu attained provincial government status 29 years ago, establishing it as a province on 8th June 1984.

Sir Frank told the gathering that Temotu is an integral part of Solomon Islands despite the distance and seeming isolation of the province from the rest of the country.

“Your Province is far from Honiara but you are part of Solomon Islands. You are not alone in this respect. Whilst we are scattered over long distances and sparsely populated on some islands compared to Honiara, we are one people. This is our challenge in building a united country and a robust economy,” Sir Frank said.

Sir Frank also used the opportunity to inform people about the role of the Governor General and the placement of the Head of State within our power structure under the Constitution and the role played by the Head of State.

“The Queen, the Head of State, is the embodiment of the executive power of the people in Solomon Islands which means the country is governed in Her Majesty’s name and authority through the voting system that we use during general elections to vote our members of Parliament,” Sir Frank explained.

By contrast, the Prime Minister through his Cabinet being the government of the day then governs the country but with the understanding that the country is being governed in the name of the Head of State.

The Constitution demands that the Prime Minister, on a regular basis, informs the Governor-General of the conduct of the affairs of the country by his Government.

“The Governor-General may offer advice, make suggestion or express views but such are not binding upon the Prime Minister. However, the Head of State is always the bed-rock of legitimacy upon which the Government operates and governs the country,” Sir Frank said.

He added that without the Head of State, there can be no legitimate Government or existence of a country as there is no country in the world that exists without a Head of State.

“The Head of State is therefore important being a symbol of unity, continuity and a fountain of honor. The Head of State alone can grant honors for community service. The Prime Minister and the Governor-General may come and go but the Head of State remains,” Sir Frank explained.

One of the functions performed by the Head of State is visiting the communities and meeting the people from time to time.

Sir Frank was accompanied by his wife, Lady Grace Kabui and senior officials from the Government House.