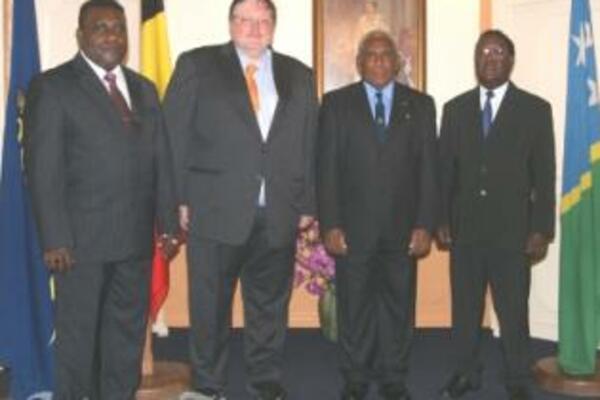 The Governor General, His Excellency Sir Frank Kabui today welcomed a new Belgian Ambassador to Solomon Islands at the Government House in Honiara.

Ambassador Patrick Renault presented his credentials to Sir Frank during a brief ceremony in the presence of the Acting Minister of Foreign Affairs Gordon Darcy Lilo and senior officials from the Ministry of Foreign Affairs.

Sir Frank added that the European Union, which Belgium is a member, is a major development partner in Solomon Islands and has supported many important initiatives such as in the 2010 national election.

"We, like you, do attach great importance to maintaining a peaceful and stable environment at the regional and international levels which are important for human development. Likewise, we do the same and regard peace and stability as necessary ingredients for economic development and prosperity for all".

Sir Frank also echoed concerns over climate change saying Solomon Islands is well aware of this as the rise in the sea level is now a reality in the country.

"There are of course other causes which contribute to global warming such as pollution from the factories in developed countries. This is why there is a need for a Treaty on Climate Change. As we know, this is a concern for the United Nations which is being addressed".

"As members of the United Nations, we both share common values such as respect for human rights and embracing the principles of democracy, good governance and all that the United Nations represent for all the world," Sir Frank said.

In response, Ambassador Renault said Belgium respects and always takes into consideration advice from Solomon Islands on regional development in the Pacific Region.

He added that whole World is facing the Climate Change challenge and the EU considers it as an absolute priority.

"We are aware of the particular threats in the region and we are looking forward to working together in this vital task," Ambassador Renault said.

The European Union is the second largest aid donor to Solomon Islands after Australia.