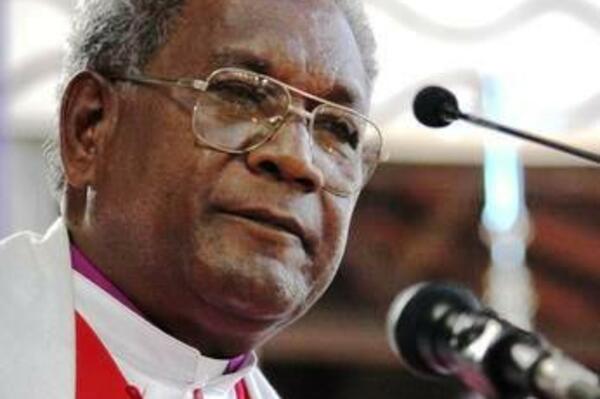 In 2000, he became one of a handful of Anglican primates to be knighted at Buckingham Palace by Queen Elizabeth for his service to religion and the community in Melanesia.
Source: Photo supplied
Share
Wednesday, 15 May 2013 09:53 AM

Sir Ellison Pogo, former archbishop of the Anglican Church in Melanesia, died May 13 at his home in Honiara of lymphoma, which had been diagnosed while he was in Auckland during last October’s Anglican Consultative Council meeting.

Pogo was archbishop of Melanesia and bishop of Central Melanesia from 1994 until December 2008, and he led the church through the ethnic tension which plagued that province during the 1990s and early 2000s.

Pogo was born in 1947 and graduated from Bishop Patterson Theological College in Kohimarama in Guadalcanal in 1976, before attending St. John’s College in Auckland for two years of further study.

He was ordained to the diaconate by the bishop of Dunedin on All Saints’ Day in 1979 and to the priesthood one year later.

Reports of his successful ministry in Dunedin led to his consecration in 1981 as bishop of the Diocese of Ysabel on the Solomon Islands, where he served for 13 years.

In 2000, he became one of a handful of Anglican primates to be knighted at Buckingham Palace by Queen Elizabeth for his service to religion and the community in Melanesia.

Pogo was asked by the last archbishop of Canterbury, Rowan Williams, to chair the Design Group for the 2008 Lambeth Conference, and he is regarded as having made a significant contribution to the success of that event.

He influenced the way Lambeth went about its work and, at key points, he introduced a Melanesian flavor to the conference worship.

Brothers and Sisters from the Religious Orders of Melanesia, for example, were chaplains to the conference – and shortly after the conference finished, Pogo was called back to Lambeth Palace where Williams awarded him the Cross of St. Augustine of Canterbury, which is the highest award the archbishop of Canterbury can bestow.

From the time of the Lambeth Conference in July 2008 until his retirement in December of that year, Pogo was the senior primate of the Anglican Communion.
He also was an ecumenist, and for 14 years he chaired the board of the Pacific Theological College. For that work he was awarded an honorary doctorate by the college, the only person ever to have been recognized in this way.

In 2008, he also was awarded the Republic of Vanuatu’s highest and most distinguished award, the Badge of Honour of Vanuatu.

His funeral will be held in the Anglican Cathedral in Honiara on Thursday, May 16.
Pogo is survived by his wife Roslyn and their three adult children.