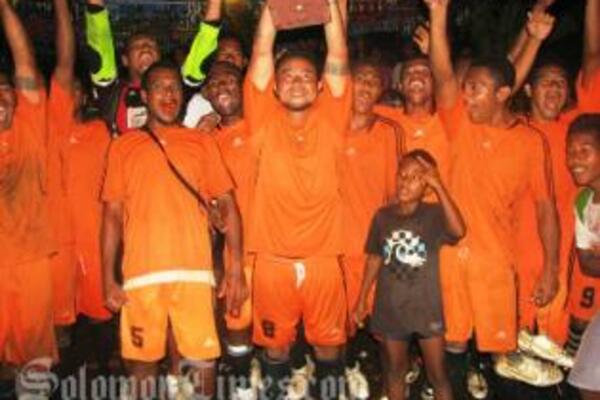 The Sipa United sports club, hosts of the 2009 Christmas "Bridging the Divide" Tournament, has won the soccer event with the Suvania netball club walking away with the netball prize.

The Christmas tournament, hosted by the Sipa United Sports Club from the 14th to the 23rd of December 2009, at the Pauta Sports Ground in Bellona, Rennell Bellona Province, was supported by The Australian Sports Outreach Program, funded by AusAID.

Organizers of the tournament said that had it not been for the generous support of AusAID it would have been difficult to host such a huge event. "We are very grateful for the support, we have been able to successfully host a huge sporting event and the real winners were the youths of our communities," said Eva Pongi, speaking on behalf of the organizing committee.

An inaugural Women's soccer match was held at the opening of the games, which was won by East Bellona 2-1. "There is promise with our girls we just need to continue to encourage them to come forward and understand that soccer is no longer just a men's game," said Mrs Pongi.

The final of the soccer competition was between Sipa United and Akaumoana. With the game ending one all a penalty shootout determined the winner. Sipa United maintained composure and netted all its penalties.

Suvania netball club proved too strong for TNT, former champions of the Province, edging TNT in the finals to walk away with the first prize.

"We have achieved the main objective of our tournament, and that was to engage youths in sporting activities, keeping them away from trouble and raising their self esteem on the pitch," said Mrs Pongi.

Sipa FC will now represent Rennell Bellona Province in the Our Telekom Club Championship later in the year.