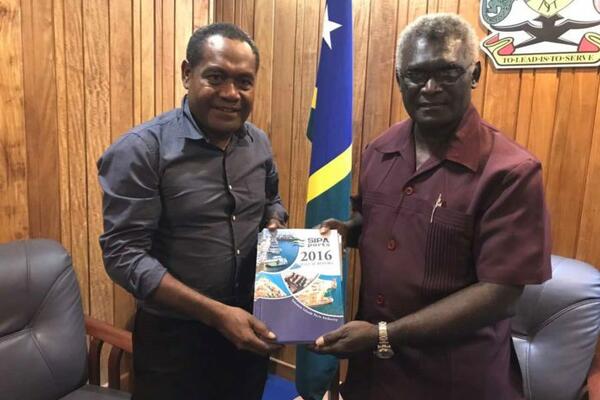 The Solomon Islands Ports Authority (SIPA) has announced that as of 31st September 2016, SIPA has made a $122million net profit.

The Chairman of Board of Directors for SIPA, Mr Billy Titiulu made the announcement last Friday 26th May 2017 whilst handing over the Annual Reports for SIPA for the years 2011 – 2016 to the Prime Minister, Hon Manasseh Sogavare.

“Hon Prime Minister, on behalf of the Board, Management and all employees of SIPA, it is my honour to present to you, as the Minister responsible for SIPA, the Annual Reports for years 2011 – 2016. These Reports are certified as clean and unqualified. It is also my pleasure to inform you as well that as of September 2016, SIPA has made a profit of $122 million” an ecstatic Chairman announced.

The Chairman further stated that the handing over of the Reports marked a significant milestone in the operation of SIPA for the past six years as the accounts of SIPA have not been audited since 2011.

The Chairman said that since the current Board was appointed in 2016, the Board discovered that SIPA’s accounts were not audited and it became the Board’s priority to ensure its accounts were audited to comply with the requirements of the State Owned Enterprises Act and International Financial Reporting Standards.

“As a result KPMG Fiji was engaged by contract through the Office of the Auditor General to embark on this extensive exercise,” he added.

The Chairman also took the opportunity to briefly update the Prime Minister on the future aspirations of SIPA and was optimistic of a bright future ahead.

Prime Minister Sogavare in receiving the Reports congratulated the Board and the Management of SIPA for this outstanding accomplishment and also highlighted that the achievements would not be possible without the cooperation of the Management and all employees in carrying out the directives of the Board.

The Prime Minister further stated that despite SIPA having gone through hard times, SIPA’s achievement was outstanding and commendable.

The Prime Minister wished the Board and Management the very best in their future endeavours in light of SIPA’s bright future.