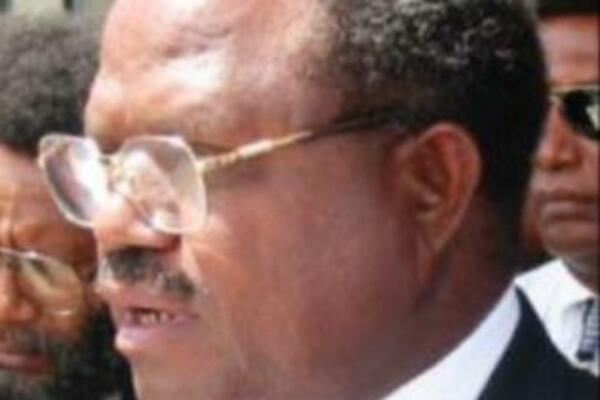 On the floor of parliament last Friday, the Speaker Sir Allan Kemakeza ruled that the motion be debated, even without it being tabled or moved in the usual manner.
Source: Photo supplied
Share
Tuesday, 30 October 2012 10:11 AM

Leader of Opposition Dr Derek Sikua has filed a case in the High Court seeking a review of the Proceeding of the National Parliament on Friday October 26.

In his sworn statement filed at the High Court, Dr Derek Sikua said he is seeking judicial review into the manner the First, Second and Third Defendants interpreted and applied Standing Orders of Parliament, suppressing his constitutional right to move a motion of no confidence on the Prime Minister.

Dr Sikua said the Speaker of Parliament agreed on Thursday night that the motion not be placed on the Order Paper for Friday as requested by the mover.

The Leader of Opposition also stated that the Clerk to Parliament was informed of the decision on Thursday night.

Dr Sikua however stated that he was informed by the Clerk when he rang on Friday morning that the Speaker had changed his mind, and instead directed that the motion be set down on the day's Order paper.

On the floor of parliament last Friday, the Speaker Sir Allan Kemakeza ruled that the motion be debated, even without it being tabled or moved in the usual manner.

Despite contentions from the opposition on his ruling, the Speaker maintained that his ruling is final.

He stated then that the fact that the motion appeared on the order paper for that day means it was duly moved.

Without it being moved and debated in the usual manner, the motion was voted on and defeated.

Members of the Opposition and Independents walked out of parliament before the vote was taken.